Breville Group Ltd (ASX: BRG) was up around 3.55% at noon today after the tough love dished out to the share price since the release of its strong half year results. What is seemingly not being factored into the appliance manufacturer’s share price right now is Breville’s plans for global expansion.

Given recent weakness in the share price, and with global expansion offsetting any decline in industry tailwinds, Morgan Stanley flags what it regards as buying opportunity following the recent selloff and maintains an Overweight rating with a target price of $36.

The business has “more than doubled in three years” the company noted. Breville blamed logistics issues for its lower North American top-line result, where congestion at the LA port constrained the company’s ability to satisfy customer orders.

Breville expects inflationary pressures and supply constraints to continue into the second half, but expects FY22 earnings of $156m, in line with current market consensus.

The company, which had $380m in untapped debt facilities and cash at the end of 2021, says it is investing into new markets and technologies and marketing strategies to boost growth.

Capital spending will increase in the second half above the $22m spent in the first half, the group said. 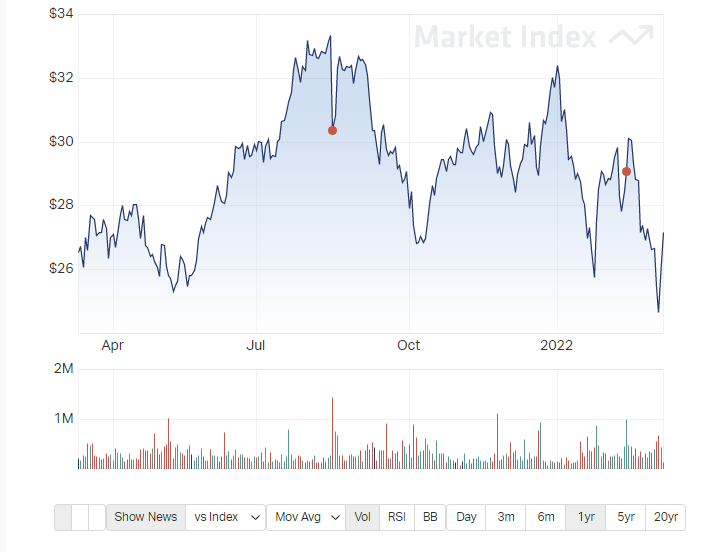 The market has struggled with Breville over the last year.

Credit Suisse: Sales and earnings beat broker’s own forecasts, with sales increasing sharply in all business units. The broker retained its Neutral rating, with a target price of $28.38, down slightly.

Macquarie: Sales growth of 17% in the North America region was probably less than actual customer demand, given the congestion in the LA port and the scarce inventory levels. Sales growth of nearly 40% in Europe came on back of high growth from previous period. The broker kept its Outperform rating with a target price of $34.80.

Ord Minnett upgraded the company from Hold to Buy on February 17, noting that although logistics constraints hit revenues, the double-digit increases on the previous period would likely support FY22 earnings estimates. Target price rises to $33 from $30.50.