Bega is on the nose: Goldman's downgrades to Sell

The release of Bega Cheese’s (ASX: BGA) trading update earlier this week did little to inspire analysts at Goldman Sachs, with the broker downgrading the food giant to Sell from Hold, with the target price moving up 3% to $5.15.

While Goldman’s call is largely around the full valuation, the broker is concerned about the headwinds facing the Australian Dairy Industry and the potential impact on future earnings.

Reasons why Goldman’s isn’t feeling it

Despite generally good on-farm conditions over the last 2 years, the broker notes Australian milk production has continued to fall. Based on Goldman’s expectant flat to declining milk pool next year, Bega’s milk intake is likely to decline modestly in FY23.

Despite higher farm gate prices, Goldman’s reminds investors that a growing number of farmers are being encouraged to sell their now more valuable herd and land, or potentially diversify away from what has been - until recently - a low-returning sub-sector over the last decade.

“We believe a return to structural growth in production is required to reverse the current margin squeeze being felt by BGA and other processors as they scramble for supply,” the broker noted.

“We believe demand for drinking milk, particularly from the supermarket channel, has created a local supply squeeze.”

Then there’s intensified processor competition courtesy of supermarket chains, which the broker adds is making the procurement environment increasingly challenging. 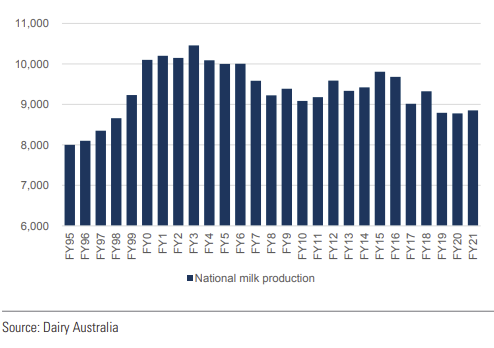 While Bega has a partial hedge with bulk commodity exposure, Goldman’s believe margins for products feeding into the domestic retail channel - mainly white drinking milk and cheese - may continue to struggle into FY23 if the company can’t negotiate a significant wholesale price increase with the supermarkets.

Due to market share issues and contractual commitments, the broker doubts Bega can pivot volumes away from domestic drinking milk and cheese towards bulks, where most of the profit is being made right now.

Outside of the short-term cost recovery from the pandemic, Goldman’s believes the delivery of the ‘One Bega’ program and integration of the Bega Dairy and Drinks (BDD) acquisition is the key driver of the broker’s earnings estimates over the forecast period.

The broker is forecasting synergies ahead of the guided $41m, with $45m forecast in FY24.

“We see BGA’s current valuation premium to peers as not fully reflective of the rising risk to volumes and margins from a more sustained inflationary input cost environment,” the broker noted. 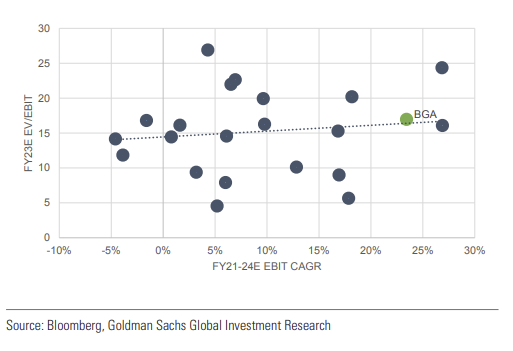 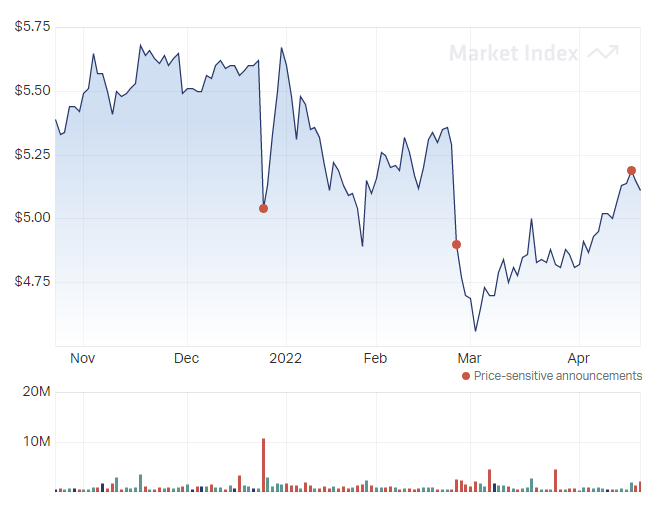 Based on the brokers that cover Bega (as reported on by FN Arena), the stock is trading on 2.1% upside to the target price of $5.17.

Ord Minnett, UBS and Morgans all have Hold recommendations on the stock, with price targets ranging from $4.80 to $5.33.

Consensus on Bega is Moderate Buy.

Based on Morningstar’s fair value of $5.86, the stock appears to be undervalued.