Bank margins poised to bottom in the next 12-months: Credit Suisse

Net interest margins at a glance

Net interest margins (NIM) have been on a steady decline since 2018, primarily driven by: 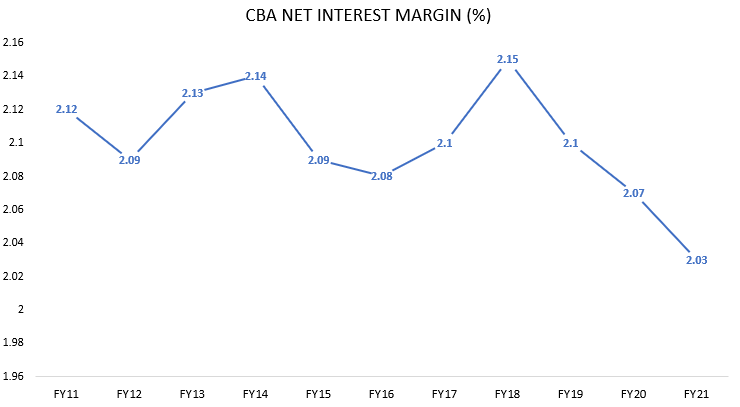 Economists surveyed by Reuters expect the RBA to raise interest rates by 15 bps to 0.25% in the July-September quarter.

Higher interest rates typically expands the difference between the interest banks pay to customers and the interest the bank earns from mortgages.

Credit Suisse believes the rising interest rate environment will see margins bottom somewhere between the second-half of FY22 and first-half of FY23.

There could be a lag between interest rate hikes and NIM expansion, but investment bank expects NIM to recover 11 to 18 basis points thereafter.

Depending on where the margin trough is, this could see NIM rebound back to 2018 levels.

Credit Suisse was more upbeat about regional and smaller banks.

Between the big four banks, Australia and New Zealand Bank (ASX: ANZ) held the largest upside, with an Outperform rating and a $30.80 target price.

Whereas the other big banks were Neutral rated with price targets representing 1-7% upside based on today's prices.