Tassal (ASX: TGR) has rejected an all-cash, $4.85 per share takeover offer from Canadian aquaculture giant Cooke. The bid represents a 22% premium to Tassal’s last close of $3.97.

The Tassal Board of Directors said the offer does not reflect the “fundamental value of the business and is not in the best financial interest of shareholders”. This follows previous bids from Cooke that ranged from $4.67 to $4.80 per share.

Why reject a premium offer?

Goldman Sachs was rather bullish on Tassal shares in a 2 June note, where the investment bank raised its 12-month target price to $4.65.

While the takeover offer exceeds the target price, the note observes some fundamental reasons as to why a much higher price is needed to take Tassal out.

In the near-term, Tassal is expected to benefit significantly from “improved market supply/demand conditions”, as “export prices are up 44% FY22 YTD vs pcp, with potential premiums maintained by logistical disruptions in Europe,” said Goldman analysts including Michael Peet and Sophie Carran.

“Traditionally, export has been a low-margin channel, but this is not the case at present given the record pricing,” the analysts said. 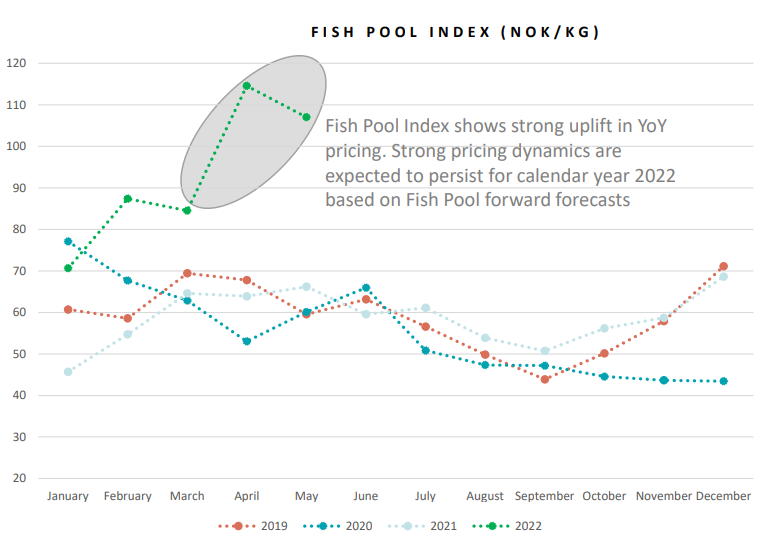 Tassal entered the prawns industry in late 2018 via the $31.9m acquisition of the Fortune Group - one of the largest prawn farming bases in Australia. Goldman views Tassal’s prawn strategy as a “key medium-term driver of earnings”.

“Our FY30 production target is in line with the company guide of c.10,000 tonnes. Short to medium term growth will be primarily matched to domestic demand, with exports being a secondary channel option at this point.”

Tassal is ramping up prawn production and farming efficiency, having harvested 3,915 tonnes in FY21 (up 59.1% compared to the previous year). Prawns require far less working capital compared to salmon, with a farming cycle of 4-6 months versus 3-4 years.

Separately, Tassal has undergone a significant capex program of over $420m invested over FY18-21. This is quite substantial relative to the company's market cap of $850m.

Tassal is beginning to realise the benefits of its growth-oriented capex, and beginning to reduce major investment programs. Capex peaked in FY20 at $138.7m, was $105.9m in FY21 and expected to fall to $80-90m in FY22.

It seems logical for the Board to want more than just a 22% premium as the company begins to transform into a more efficient and diversified aquaculture player.