Australian retail spending rose 0.9% month-on-month in May, the fifth consecutive monthly increase and a fresh all-time high. The figures beat economist expectations of a 0.4% gain and up 10.4% compared to a year ago.

“There was growth across five of the six retail industries in May as spending remained resilient,” said Ben Drober, Director of Quarterly Economy Wide Statistics.

“Higher prices added to the growth in retail turnover in May. This was most evident in cafes, restaurants and takeaway food services and food retailing," he added. 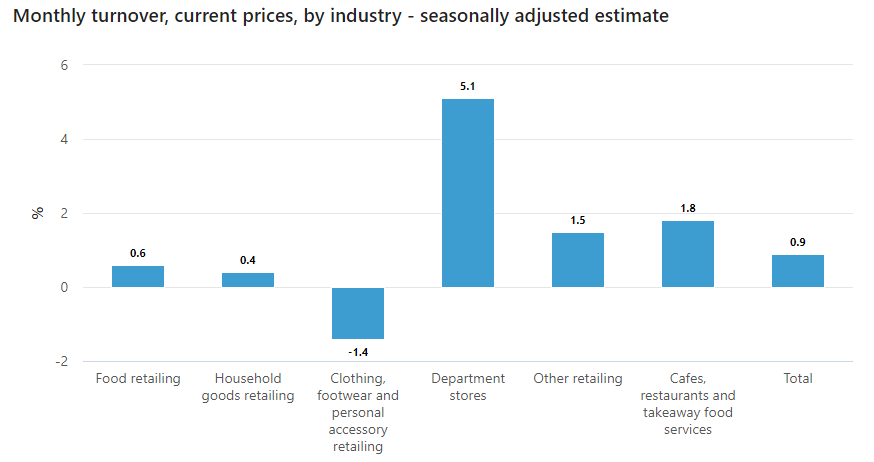 The rise in May followed rises of 0.9% in April, 1.6% in March, 1.8% in February and 1.6% in January. The month-on-month growth is slowing, but understandable in the face of surging consumer prices.

The upbeat economic data reminds me of a quote from Oanda senior market analyst, Ed Moya, who said that "stocks can't win right now, either the economic data softens and the economy is much weaker than we thought or robust readings pave the way for the Fed to be more aggressive with their inflation fight."

The data shows that Australian consumers continued to spend in the face of surging prices. However, the resilience may signal to the RBA that the Australian economy can stomach more interest rate hikes, which then becomes a headwind for both the economy and equity markets.

Take it with a grain of salt

At face value, resilient retail sales is a positive for ASX-listed discretionary stocks.

Though, it's more than likely that retail margins are declining in the face of surging freight and logistics costs, labour shortages, elevated levels of inventory and changing consumer spending habits.

Interestingly, Nike reported its fourth-quarter earnings on Tuesday, where it said challenges such as higher transportation costs and longer shipping times are persisting.

CFO Matthew Friend said the company is paying about five times the rate it paid pre-covid to ship products from Asia to the US. The transit times were also two weeks longer than prepandemic.

With reporting season just around the corner, and most ASX-listed retail stocks down 20-40% year-to-date, it feels like anyone can surprise to the upside and downside.