Having rallied over 20% late June on revelations that automaking giant Stellantis had snapped up an 8% stake in Vulcan Energy (ASX: VUL), the mid-cap lithium miner was up 8.06% at the open after announced plans to further develop its Italian projects.

Vulcan has signed an agreement with the country’s largest geothermal energy producer, Enel Green Power (EGP), to assess the potential of Vulcan’s Cesano license through a joint scoping study.

A global leader in geothermal energy, with plants in Italy, Chile and the US, EGP has previous knowledge of the Cesano area having already drilled numerous wells in the area.

What we know about the Vulcan/EGP agreement so far

“We welcome the opportunity to collaborate with Enel Green Power on the development of geothermal lithium… by growing and diversifying our project development portfolio, we ultimately aim to develop a globally significant Zero Carbon Lithium business focused on Europe, for Europe,” he noted.

Vulcan has received a positive result for its preliminary EIA application (UVP-V) in its Taro license, to drill six wells for geothermal energy and lithium.

The State Office for Geology and Mining in Rhineland-Palatinate has determined that the environmental impact of the planned wells, taking into account their size, extent and intensity of action, cannot be assessed as significant.

There is therefore no requirement to carry out a full environmental impact assessment for the wells, which is a positive step forward for the Zero Carbon Lithium Project development.

Meantime, while behind schedule due to previously flagged supply chain issues, initial commissioning of the Sorption Demo Plant is planned to commence in late fourth quarter.

Vulcan’s share price is down -32% over the past 12 months but has virtually halved from $10.85 early April following the recent market fears around oversupply issues.

Consensus on Vulcan is Strong Buy.

Based on Morningstar’s fair value of $11.36 the stock appears to be undervalued.

The cash balance (EUR116m) together with liquid investments (EUR25m) totalled EUR141m at the end of March 2022. 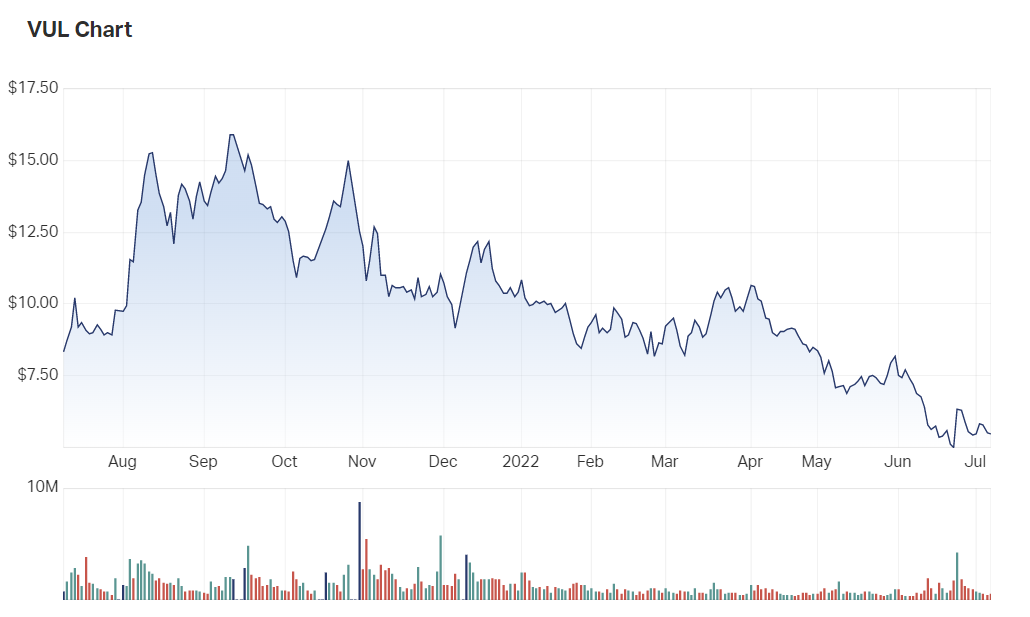