If Russia’s invasion of Ukraine isn’t keeping you awake at night, the World Trade Organisation’s (WTO) outlook for GDP growth should make all investors sit up and take stock.

Within its worst-case scenario, the WTO can see Russia’s war in Ukraine halving world trade growth this year and dragging down global GDP with it.

Cynics amongst you may dismiss the WTO’s findings as unsubstantiated academic musings and given the organisation’s inability to correctly read the economic tea leaves during the pandemic, a heathy dose of scepticism is understandable.

But for what it’s worth, the Geneva-based global trade body believes war in Ukraine could over the longer term ignite a disintegration of the global economy into separate blocs.

While the contribution of Russia and Ukraine to total world trade and output is not big, the WTO reminds markets that they hold critical suppliers of key commodities, notably food and energy. 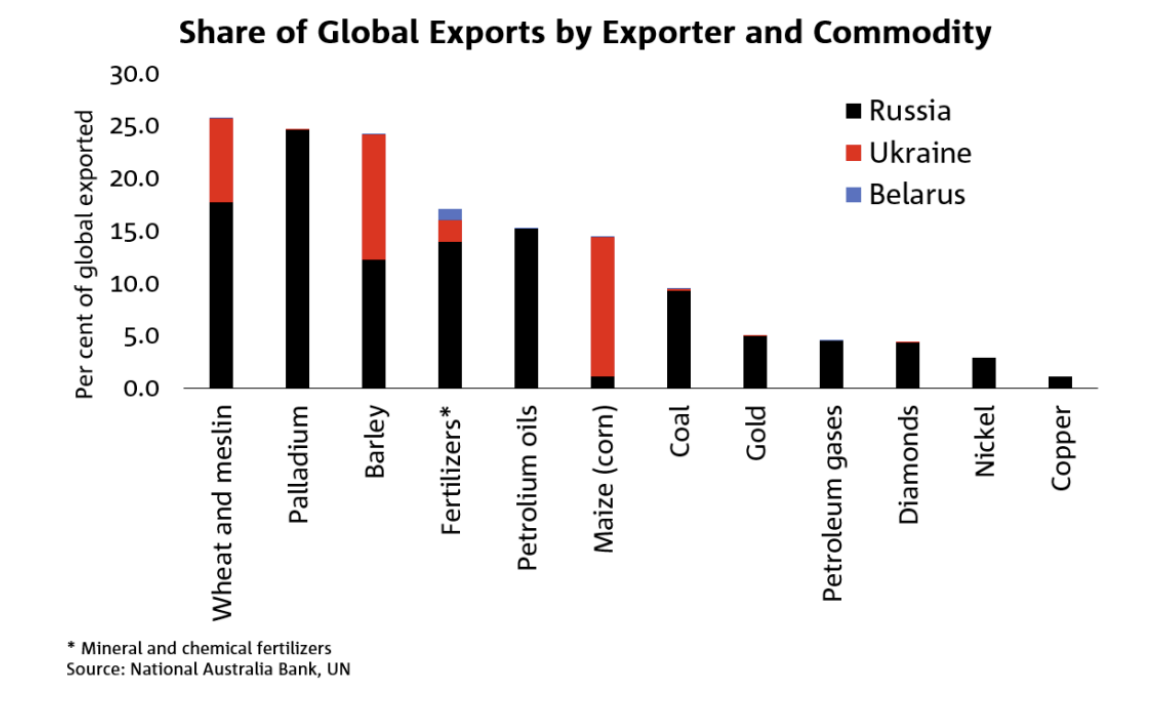 “Using a global economic simulation model, the secretariat projects that the crisis could lower global GDP growth by 0.7 to 1.3 percentage points, bringing growth to somewhere between 3.1% and 3.7% for 2022,” the WTO said.

Courtesy of global sanctions, especially on key exports of gas, oil, coal and metals like gold, copper, nickel and platinum, the World Bank has Russian GDP falling by a whopping -11.2%, while the Ukrainian economy is pegged to witness -50% shrinkage.

Credit rating agency S&P Global suspects further sanctions on Russia will only stymie the dictatorship’s willingness and technical abilities to honour the terms and conditions of its obligations to foreign debtholders.

While the US government has blocked access to dollars held in American banks, Russia’s finance ministry claims to have used roubles to pay around $US650m in US dollar-denominated debt obligations.

However, credit rating companies Moody’s S&P Global and Fitch were quick to interpret payments in a currency different from the one the debt was sold in as tantamount to default.

Loan documents expressly call for payment in US dollars, and Russia now has [less than] 30 days to make good payments in right the currency or be called for being in default early May.

US and European banks

Without putting fine a point on it, defaults aren’t good for banks, and the net effect on those in the US and Europe could make for some unpleasant reading during the next round of quarterly results.

Once a country defaults, it can be cut off from bond-market borrowing until the default is paid and investors’ confidence in the government's ability and willingness to pay is restored.

Assuming Russia retaliates against Western sanctions by choosing to default, foreign lenders will take direct losses on their debt.

Fortunately, Russia does not hold an Australian dollar account with the Reserve Bank of Australia (RBA), and Australian banks, unlike their European and US counterparts are not directly exposed.