It would be a bleak future for investors in toll road operator Transurban Ltd (ASX: TCL), whose shares tumbled -35% at the start of 2020, and aside from a slight recovery, have traded low ever since.

Now, three years on, and with motorways are again clogged with commuters, the CBDs are busy, and the investment case for companies dependent on traffic is likewise returning to life.

Transurban CEO Scott Charlton recently noted that the worst of covid is now in the rear-view mirror, with traffic volumes in key markets set to return to normal, interest rate hedging in place, plenty of cash and credit on hand, and a pipeline of future projects ahead.

The figures seem to bear this out. Sydney traffic in the December quarter was above the level of two years earlier, while Brisbane was in line with its pre-covid levels.

Only Melbourne, which endured lengthy lockdowns, was still well below pre-covid traffic levels in the last three months of 2021.

Charlton also cited research showing 87% of Australians and Americans - Transurban’s other big market - expected to do most work at a workplace rather than at home.

Other research conducted by the company showed private transport gaining in popularity over public transport.

Overall traffic volumes were down -4.8% on the previous period, as restrictions impacted travel in North America, Victoria and other areas.

Even though the first-half FY22 earnings fell short of consensus forecasts, many analysts seem receptive to Charlton’s upbeat sentiment.

Morgans noted the earnings miss, but its own Buy rating was based on the stock’s cheap valuation - presenting a good buying opportunity.

Ord Minnett - the most bullish of the brokers covering the stock, with a $15.40 target price - expected traffic volumes to return to normal by FY22, while Transurban’s “strong” inflation and interest rate protection measures should allow the toll group to beef up its dividends. 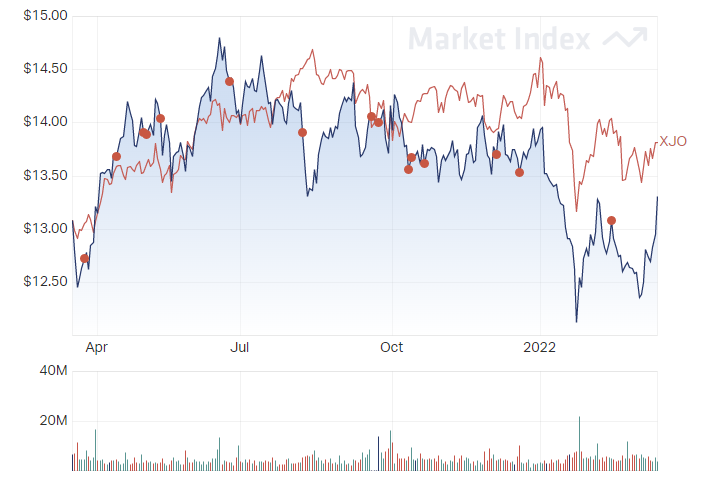 Transurban's share price has underperformed over the last 12 months, but recent recovery is encouraging.

Macquarie: Traffic volumes on some roads are already above pre-covid levels, pointing to a strong HY22 and FY23. Dividends may improve as well. The broker maintained its Outperform rating, with a slightly lower target price of $14.80.

Credit Suisse: The half year results were in line with the broker’s expectations, but it was disappointed with the higher costs and Melbourne roads performance. The broker also predicted full traffic volume recovery would come later than guided by management. It maintained its Outperform rating but dropped its target price from $15.15 to $14.60.

Morgan Stanley: The broker noted that expenses at Transurban are growing rapidly, including on accounting software, IT and insurance. The broker dropped its target price to $13.55, from $14.28, but maintained its Neutral rating.