NRW Holdings (ASX: NWH) received a relatively cool market reaction after the diversified provider of contract services to the resources and infrastructure sectors announced that two of its subsidiaries had bagged $878m in multiple mining contracts.

Given the magnitude of the staffing challenges experienced across the mining sector, and especially in the Pilbara, the market may be reserving its judgement on whether new, existing and future projects might be compromised.

This may go some way to explaining why the mid-cap contractor’s share price was only up around 2.35% after lunch today.

What may have created something of an overhang for the stock was last week’s downgrade to Neutral from outperform by Macquarie: Target price decreases to $1.80.

Much of the broker’s downgrades across its mining services outlook are due to cost and labour headwinds, and increasing competition, which are continuing to impact margins.

While Macquarie acknowledges that renewed spend in iron ore in the Pilbara is a key catalyst for NRW Holdings, the broker also suspects developments are 6-12 months away, leaving risk of a short-term earnings gap.

What may also be playing on the minds of investors is underlying weakness in the iron ore price, with the  Office of the Chief Economist (OCE) forecasting iron ore prices to decline to lower "long-run levels", with prices to average US$85 in 2023 and US$70 in 2024.

The group is a no stranger to winning contracts, and at the half year increased its order book by $4.3bn and pegged the near-term tender pipeline capable of being awarded in the next 12 months at $19.5bn.

Adding to the group's order book today, management announced that subsidiary Golding Contractors, has won a five- and half-year mining services agreement with Wonbindi Coal at the Baralaba North mine.

Then there’s the subsidiary, DIAB Engineering, which has also been awarded two contracts to a value of around $78m.

While one of these contracts is with Lynas Rare Earths’ (ASX: LYC) processing facility in Kalgoorlie, the other is with Rio Tinto (ASX: RIO) iron ore to secure the supply, fabrication and installation of multiple dust suppression systems to be used at the Tom Price and Western Turner crusher and conveyor systems.

The project will run for about 12 months and employ 60 people at its peak.

Full year earnings (EBITA) is expected to come in at the top end of the guidance range of between $150m to $155m.

An interim dividend was declared at 5.5 cents per share (CPS) fully franked, up 37% on the previous period. 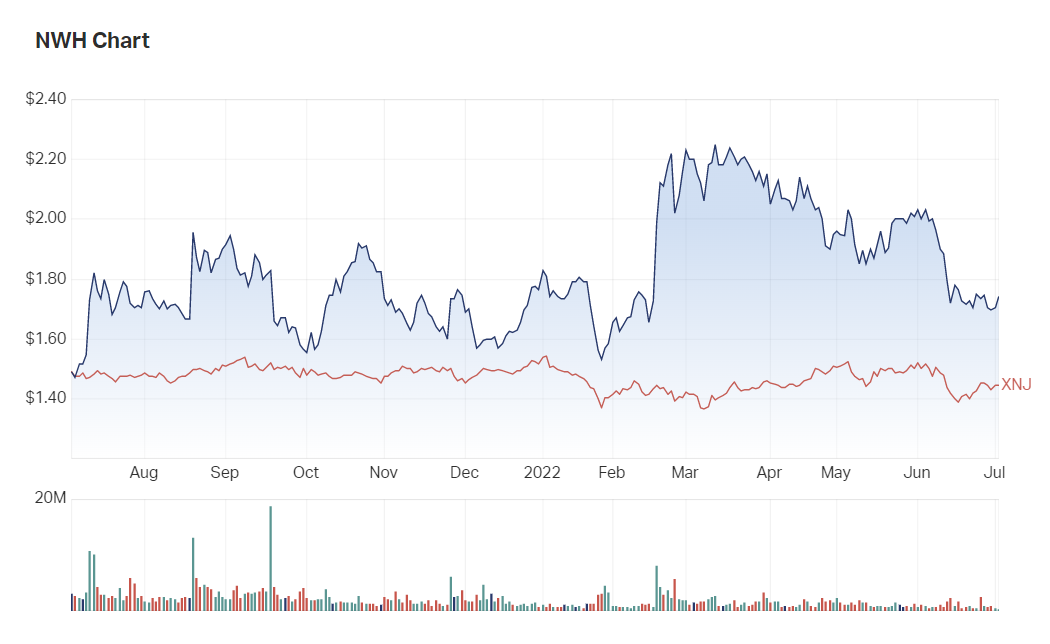 While the group’s share price is up 17% over 12 months, its has been losing ground since early June from $1.98 to $1.71 last week, before bouncing marginally higher today.

Given that the business still has opportunities, the decision to maintain top end of guidance, may end up looking somewhat conservative.

Today’s treatment of the group’s announcement should remind investors that the market sees what it wants to see.

For example, compare the market’s Ho Hum reaction to the company’s announcements today with the euphoria dished out to shipbuilder Austal (ASX: ASB) last week on the back of what might be a $3.3bn contract with the US Coast Guard.

Based on the technical issues that have confronted Austal on recent projects, assuming this latest $3.3bn contract is bankable appears a little premature.

Based on the two brokers covering NRW Holdings the stock is currently trading with 23.6% upside to the target price of $2.15.

Based on Morningstar’s fair value of $2.20 the stock appears to be undervalued.