Having recently been granted the greenlight from independent experts, Tabcorp (ASX: TAH) shareholders will by 8 April have received a long-awaited demerger booklet updating them on the finer details around the $10bn demerger of its lotteries arm.

Assuming a demerger is agreed upon [by shareholders] and the courts on 12 May, shareholders will be issued with one new share in its strongly performing lotteries division – ASX-listed The Lottery Corporation (TLC) - for each Tabcorp share they currently own, while retaining their share of Tabcorp.

TLC will include the Lotteries and Keno division which has a monopoly over Australia’s lottery licences (ex-WA).

This will leave ‘New’ Tabcorp with the Wagering and Gaming Services divisions, which include the TAB bookmaker, Sky Racing broadcaster, Australia’s largest gaming services provider.

Set for completion by 1 June, the demerger deal will arguably be one of the biggest transactions on the ASX this year, and a trail of suitors is expected to circle within short order.

Private equity firms, London-listed Entain – which owns the Ladbrokes and Neds brands in Australia - and ASX-listed BetMakers Technology have already been kicking the tyres on the company’s struggling $2.5bn wagering business for some time.

Other entities, including Stonepeak, Brookfield and GIP are also expected to be amongst future bidders.

While Tabcorp’s management originally dismissed the idea of demerging as ‘total nonsense’ a subsequent review concluded that a split would allow these two market leading businesses to operate independently, optimise their capital structures and trade at market values which reflect their individual values.

The split means investors can now choose a stable, cash generating utility stock like TLC. Based on TLC’s plans to pay out 70-90% of profits as dividends, the company will no doubt attract investors looking for a stable income.

If last year’s net profit of $372m is any guide, management – based on the payout ratio – could pay a dividend of around 13c.

Then there’s the higher risk wagering business which will attract investors looking for higher growth.

While New Tabcorp is expected to have under $100m of net debt – following a shift of debt to TLC – it also comes with a $950m revolving loan facility. Given the deregulation of the US wagering industry, management may start eyeballing this market for likely acquisitions.

By comparison, TLC is expected to have an opening net debt balance of around $2.1bn, with the company targeting a debt-to-equity ratio of 3.5-4.0.

Given that investors tend to favour the better half of any demerger, Intelligent Investor suspects New Tabcorp may be sold more heavily when shareholders get the opportunity to exit.

The fund manager expects TLC to get a boost and New Tabcorp to take a hit due to added selling pressure. But now that there’s a clearer path to hidden value, the fund manager recommends Buying below $6.00, and selling above $8.00. 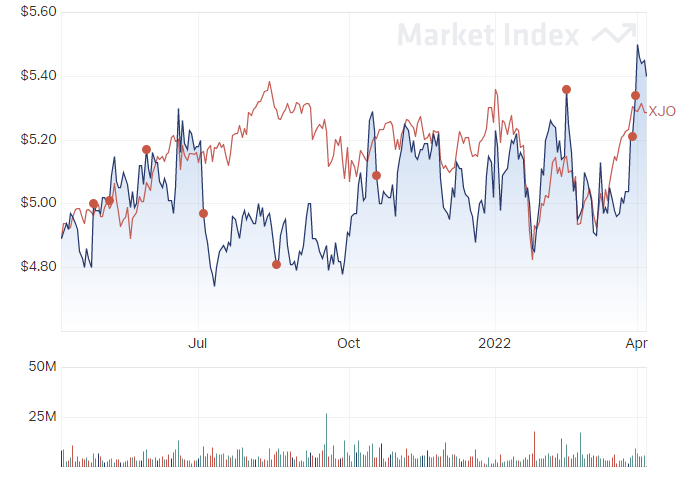 Tabcorp's share price has outperformed the ASX200 over the past year.

Based on the brokers that cover Tabcorp (as reported on by FN Arena) the stock is currently trading with 7.0% upside to the target price.

Based on the infrastructure-like qualities and growth outlook, Macquarie believes the TLC business within Tabcorp is undervalued, and retains an Outperform outlook.

Meantime, Ord Minnett suggests investors contemplate the value of the media business within 'New Tabcorp', before disposing of the wagering and media arm. Hold rating and $4.90 target price are maintained (01/04/22).

Consensus on Tabcorp is Moderate Buy.

Based on Morningstar’s fair value of $4.71, the stock appears to be overvalued.