Strike Energy (ASX:STX) has moved towards offtake for 100% of its 1.4Mtpa ganunlar ammonia (urea) fertiliser project with US based Koch Fertilizer LLC, one of the world's largest fertiliser companies.

The offtake agreement is enacted within a non-binding term sheet, which means further volatility of international fertiliser prices could see Koch Fertilizer pull out of the deal, though Koch has agreed to an initial term sheet intended to cover a 15 year period.

The product will be manufactured from Strike Energy's proposed Project Haber development; intended to be a low-emissions urea development located in the WA wheatbelt.

Strike Energy will use natural gas from its gas drilling operations to produce ammonia; LNG is a feedstock in the production of fertilisers and the record highs fertilisers are currently trading at is indicative of higher energy costs. 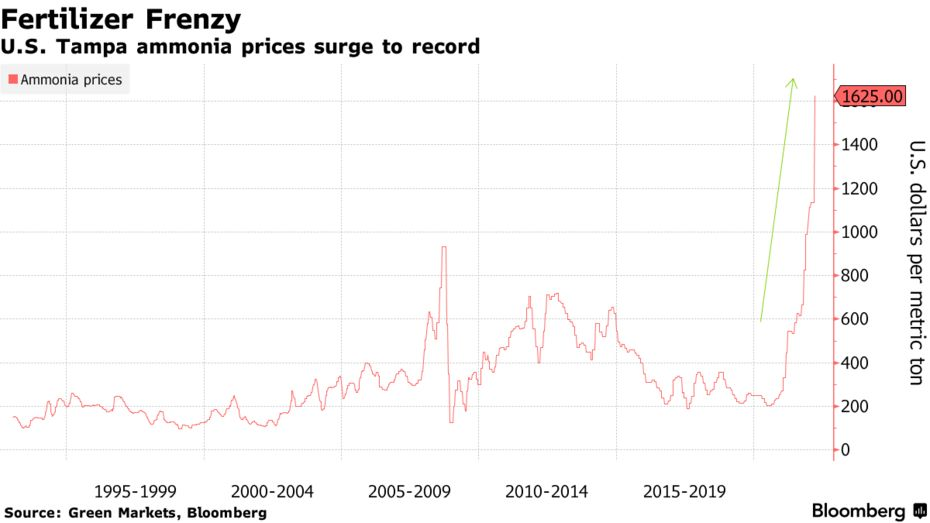 (Source: Bloomberg) A chart from March reveals the shape of charts for US Ammonia prices

Axios reports fertiliser prices in January 2022 were up 125% year on year; other trading houses predict the price of fertiliser will remain high into 2024. While this is good news for traders, analysts for Axios are concerned the high prices could help fuel an international food crisis.

Currently, the price of wheat and corn are also at record highs.

Bloomberg reported late last year the price of livestock manure has increased as agriculturalists seek lower-cost alternatives to synthetic fertilisers. The high price of fertilisers has also been tied to increased pressure on the profit margins of farmers.

Whether or not Strike Energy can begin producing its 1.4Mtpa quota within this window of upside remains to be seen, though, the longevity of the deal indicates clear interest from Koch Fertilizer.

The two companies are now to negotiate and draft a full form definitive offtake agreement intended to make binding a ten-to-fifteen year offtake arrangement with pricing linked to international benchmarks.

It all comes down to FID

Of course, the outcome of that process hinges on the Final Investment Decision of Strike Energy's Project Haber.

The move from energy into fertiliser is not particularly unusual; Leigh Creek Energy, after changing its name to Neurizer (ASX:NRZ) last year, re-branded as a fertiliser company on the back of its South Australian operations.

"With global urea prices at all-time highs, the timing for this development in Australia is now."

While Project Haber is intended to provide cheaper supply into the Australian market, it is unclear if Koch Industries, based in Kansas, will be legally obliged to redirect any quantity into the domestic market per a proposed binding term sheet.