Shares in the aluminium-focused company have rallied 31% year-to-date and up 86% in the last 12 months.

That said, the South 32 price chart is almost vertical, giving off a 'too high to buy' feeling.

With that in mind, let's break down aluminium's recent events and how brokers are weighing up the situation. 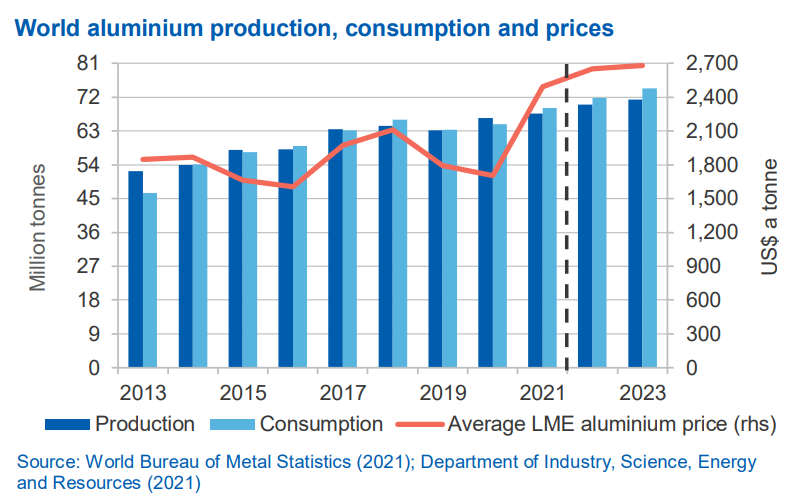 Demand for aluminium remained steady throughout covid, and the recent pickup partly reflects the increased use in new energy efficient car models as well as food packaging and other items.

Russia supplies circa 6% of the world’s aluminium.

Aluminium prices have continued to rally as a result of logistical sanctions that would block the supply of metals from Russia.

Last week, the world’s three largest container lines temporarily suspended cargo shipments to and from Russia in response to Western sanctions on Moscow, according to Reuters.

Aluminium stockpiles in LME-registered warehouses have declined by more than -50% in the last 12-months, from 2m tonnes to around 800,000 tonnes.

The supply risk on top of dwindling stockpiles and there you have it, a once in a lifetime commodity squeeze.

A struggle for upside

7 major Australian brokers cover South 32. Most of the price targets were released in the third week of February.

Funnily enough, it took South 32 less than two weeks to top the broker's share price targets. Which is why the stock appears a little overvalued.

Most brokers cite a bullish spot price scenario for South 32, with expectations of a triple percentage increase in earnings for FY23.

The 7 brokers average an FY23 forecasted earnings per share (EPS) of 63 cents.

This values South 32 at a price-to-earnings of 8.5 times FY23 estimates.