Amid the dual crises of covid and Russia's invasion of Ukraine, globalisation – which led to the freer flow of goods, services, people, and ideas globally - is arguably facing its biggest test of the post-cold War era.

That’s view being espoused by Goldman Sachs analysts who argue that continued deglobalisation, driven by great power politics and rising political pressure, to address income inequality will be a key driver of a commodity supercycle ahead.

The broker believes that the rise of US-China competition, together with a resurgent Russia, is leading the charge on a new wave of deglobalisation.

But unlike year’s past the next spree is going to be more localised going forward.

While Russia's invasion of Ukraine, may herald a new era of deglobalisation, Goldman’s points to clear evidence it has already begun.

For example, the sum of merchandise imports and exports has edged down by 4pp to 47% of global GDP since its 2008 peak, despite a rapid rebound in 2021 owing to the pandemic-related surge in global goods demand. 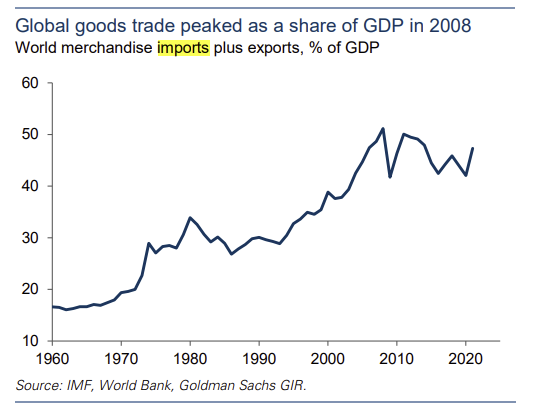 The net effect adds Currie is an increased cost of funding to the west as inflation and rates continue to rise.

“While maintaining higher-cost but more secure supply chains, serves a clear strategic purpose over the lower-cost comparative-advantage model that globalisation pursues, it is important for policymakers to be aware of the resulting shift in the macro environment,” notes Currie.

“If history is any guide, these shifts—and their inflationary impacts—are just beginning.”

Looking beyond energy, Goldman’s believes talk of deglobalisation and the localisation of supply chains is even more acute when it comes to the semiconductor space, where US and European policymakers have introduced incentives to increase domestic production.

However, given that “complete” localisation of semiconductor supply chains isn’t feasible any time soon, the broker warns investors to prepare for a world in which supply chain disruptions remain a risk.

“The “complete” localisation of the semiconductor supply chain would involve not only localising production of the chips themselves, but also ensuring that all required technological inputs in terms of equipment, materials, services, and IP are sourced locally,” claims Goldman’s head of equity research James Covello.

“In our estimation, the cost of doing so in separate geographies would be punitively high—if not impossible—given the finite technological resources and competitive labour pools which countries are able to draw upon.”

In conclusion, while the reshoring of front-end and back-end production may decrease the dependency on logistical networks, Covello also reminds investors that the semiconductor supply chain will remain reliant on global partners for critical tools and process inputs.

Both of which, notes Covello have the potential to bottleneck the reshored production supply chain in times of stress.

Implications for the dollar

Zach Pandl, Goldman’s co-head of Global FX, Rates, and EM Strategy, argues that shifts in globalisation and the US’ weaponisation of the dollar (US$) - in response to Russia’s invasion of Ukraine - together with stiffer competition from other currencies, could erode the dollar’s role as the world’s dominant currency over the coming years.

This, combined with other tactical and structural shifts likely underway, reinforces his view that the dollar will weaken over the medium term. 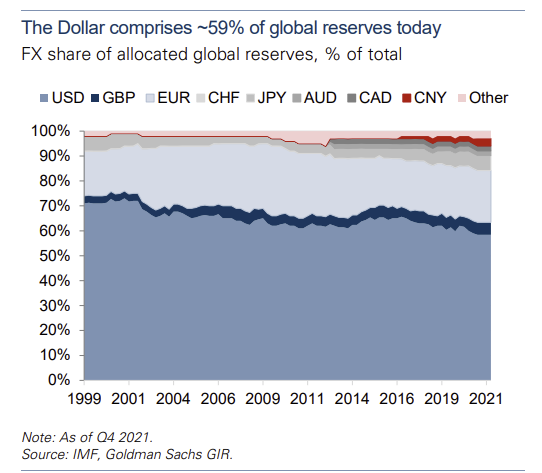