Assuming Russian oil exports, which have fallen since the country’s invasion of Ukraine, deteriorate further – leading to seaborne Russian oil amounting to 3m barrels per day – courtesy of sustained sanctions, it could lead to the sixth-largest disruption since World War II.

That’s the view from strategists at Goldman Sachs Research which suspect China is readying to play a critical role in how the oil market rebalances.

While the middle kingdom can likely take in more Russian exports, much of this eventuality, adds Goldman’s depends on its willingness to rapidly become Russia's predominant trade partner.

Whether or not there will be a global shortfall in oil, adds Goldmans is largely continent on China’s decision to buy substantially more Russian oil and reroute planned imports to other destinations.

While China imports 1.5 mb/d of Russia’s 6 mb/d seaborne exports, it could, adds Goldmans feasibly take the majority of the EU-US combined 4 mb/d imports.

Given that it would take time for oil to flow from additional supply from core sources like OPEC members, including Iran and Venezuela - if their sanctions are curtailed - in the medium term, Goldman believes such disruption will likely accelerate a transition towards nuclear and renewable sources of energy.

“The only way to quickly rebalance the energy market from a major disruption in Russian exports is through much higher prices that cause consumption to drop,” said Goldman Sachs Research commodities strategists.

As a base-case scenario, Goldmans’ strategists expect a disruption of 1.6m barrels per day, with Brent oil prices rising to US$135 per barrel during 2022, and 2023 forecasts at USA$115/bbl.

Sanctions on Russian crude could create one of the largest - and most enduring - disruptions that the oil market has ever seen: Goldman 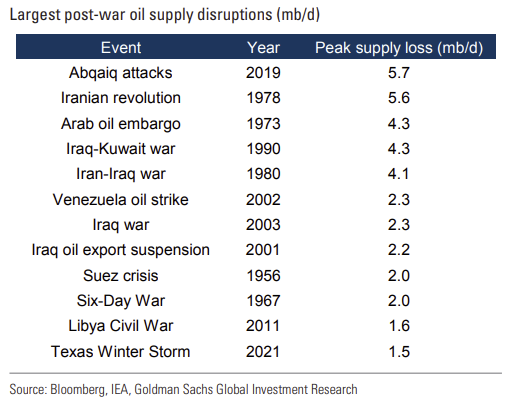 In Goldmans' view, the energy shock created by Russia will change energy policy and planning in coming years.

As a case in point, the EU will soon announce its energy roadmap and has reportedly shifted its short-term focus from decarbonisation to energy security.

The net affect, adds Goldmans is the likely reliance for now on more coal, more nuclear, and gas generation, and overall allowing for more carbon emissions, consistent with the sharp sell-off in European carbon prices over the past week of nearly 30%.

As well as setting in motion a potentially large fall in global oil supply - that would redraw the global energy map – Goldmans also believes such a shock in the medium-term is likely to accelerate the drive towards locally sourced electricity (nuclear, renewables, storage).