Rumble Resources (ASX: RTR) has soared 16% today. The jump comes after the company announced drilling results for a new major feeder fault zone in the Chinook prospect, located within the Earaheedy Base Metal Project in WA.

The new feeder zone – which has been dubbed the Kalitan Feeder Zone – contains intersections of shallow high-grade sulphide zinc-led (Zn-Pb) mineralization. The zone also has a strong silver (Ag) presence.

Rumble notes that Kalitan has been defined over a length of 2.3km and remains open along strike and at depth.

80% of lead is used to produce batteries. With increasing focus on decarbonisation and electric vehicle production, lead has benefited from this trend.

In today’s announcement, Rumble Resources stated that: “Due to increasing technical knowledge as a result of drilling completed to date, and ongoing geological and geophysics interpretation, the potential to intersect multiple inferred high-grade feeders at Chinook, Tonka, Magazine, Navajoh and ultimately targets associated within the 42km of prospective mineralised strike, is very high.”

It may be worth keeping an eye on Rumble Resources. Half the drill assays for the company’s program are still pending, including some holes that are likely to further intersect Kalitan.

Moving forward, further drilling is set to better understand the dimensions of the shallow high-grade zin-led mineralisation at Kalitan. 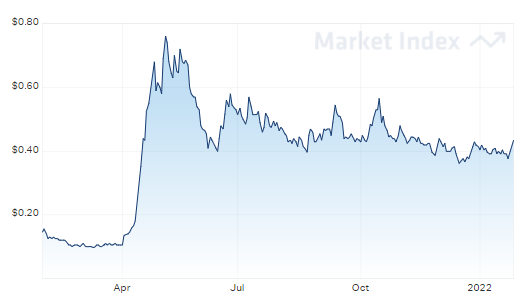