While MoneyMe’s (ASX: MME) recent note to the exchange - to confirm that the merger with unlisted non-bank lender SocietyOne is complete - did little to excite the market earlier this week, the fintech’s share price was up 3.03% at the open.

The merged entity will have a loan book just nudging $1bn, and around $150m in revenue.

Beyond growth-by-acquisition, the company has also experienced some noteworthy organic growth. While loan originations more than tripled in the half (to $441m), the loan book is up from $168m a year ago to $590m.

While total revenue doubled to $48m, contracted revenue increased to $178m from $45m a year ago.

Management has not guided for the full year.

“The combination of MoneyMe and SocietyOne will lead us to being a formidable non-bank lender and closes the gap to the major banks,” Howes noted.

The combined entity will run on MoneyMe’s proprietary platform Horizon.

Meantime, the company’s new secured car loan product, Autopay has grown to a loan book of $155m in just eight months of operation.

While geopolitical uncertainties did not make it a good time to be capital raising, management and other insiders – who collectively own around 70% of the stock – may have simply concluded that the share price required for participation would have been too dilutive for existing shareholders.

The recent $25m raised via a senior secured loan, follows the new $200m warehouse facility added by Morgan Stanley last December. Given the rate of growth the company is experiencing, it’s likely more of these provisions will be required in short order.

Interestingly, for the six months to December, the average interest rate on MoneyMe’s corporate debt fell to 5% from 9%, which suggests that lenders have no issues with the company’s business model. 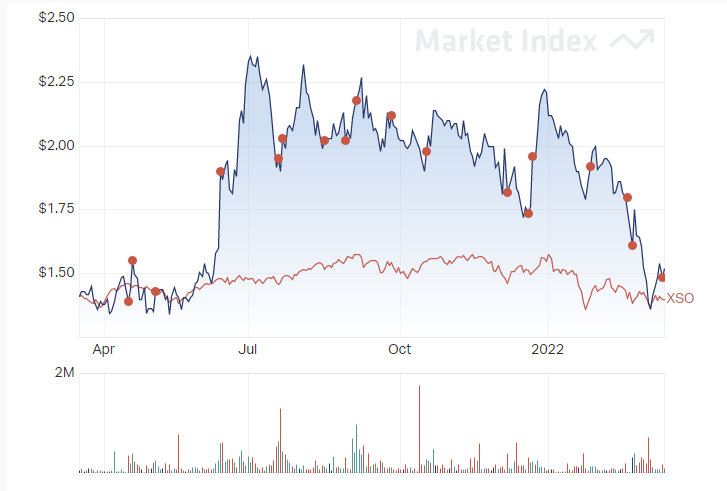 Based on the (two) brokers that cover MoneyMe (as reported on by FN Arena), the stock is currently trading with 57.2% upside to the current price.

Based on the established presence of its lending brand and active customer base, Ord Minnett believes the acquisition of SocietyOne is transformational to the company’s growth ambitions. The broker maintains a Buy, with the price target falling slightly to $2.21 after peer multiples have retraced.

Morgans notes that Autopay is contributing strongly to growth and maintains an Add with the target price rising slightly to $2.60, after the broker adjusted top-line estimates.

Based on Morningstar’s fair value of $2.15, the stock looks to be undervalued.