While brokers are at odds as to where oil prices could go to from here, one thing they can agree on is that they’re likely to move significantly higher.

RBC Capital Markets' postulates that under a recession-based scenario in which oil demand is taxed at similar rates experienced within previous downturns, the oil price could fall back into the mid-US$70 a barrel range during the second half of 2022.

While RBC pegs the likelihood of this outcome at around 15%, the broker believes a structural multi-year tightening cycle [for oil] is a fare more likely outcome.

While it’s anyone’s guess how high oil prices could go under a tightening cycle, the broker believes the commodity could easily reach $200 a barrel.

The broker reminds investors that one key lesson from past cycles is that “oil market pricing can be swift, violent and unforgiving in both directions.”

Meantime, JP Morgan also reminds investors not to overlook the wild card that Russia could throw into the already tightening oil price cycle.

This could happen if the country decided to cut its output, especially within a market already experiencing record-high gas prices.

While the current price for a barrel of oil stands at around US$110, JP Morgan analysts suspect a move by Russia to cut output could see oil increase three-fold in price.

Russia may not play ball

The Group of Seven nations are currently working out a way to cap the price fetched by Russian oil.

While this is intended to tighten the screws on Vladimir Putin’s war machine in Ukraine, Kaneva fears this strategy could backfire if Russia decides not to participate and hits back by reducing exports.

“It is likely that the government could retaliate by cutting output as a way to inflict pain on the West. The tightness of the global oil market is on Russia’s side.”

Based on Moscow’s fiscal robustness, Kaneva argues that the country has the capacity to significantly reduce daily crude production by 5 million barrels without excessively compromising its economy.

However, the knock-on effect for the rest of the world, adds Kaneva could be dire.

Kaneva notes while a 3 million-barrel cut to daily supplies would push benchmark London crude prices to US$190, the worst-case scenario of 5 million-barrels could mean a “stratospheric” US$380 price for crude. 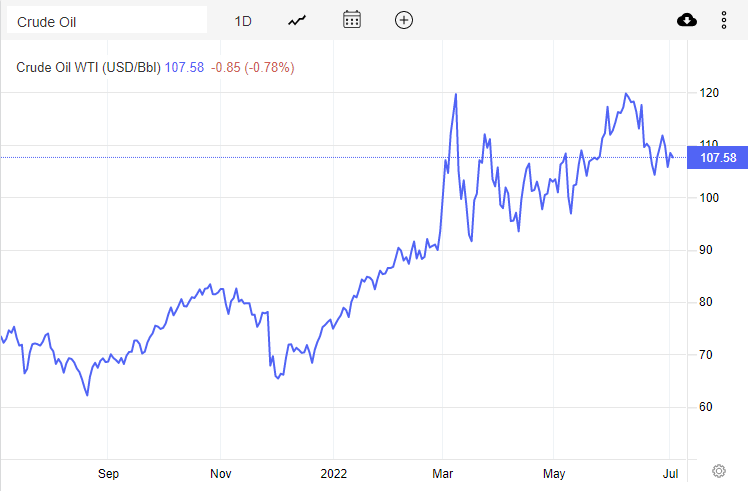