Despite household spending showing clear signs of slowing after rate hikes, and dire warnings for discretionary retailers, Myer’s (ASX: MYR) share piece was up 22.50% at noon following revelations FY22 net profit will virtually double to between $55m and $60m, it’s best result since 2018.

Within an upbeat trading update for the year ended July 30, Myer advised investors that the iconic department store expects to report its strongest net profit in five years, with the online platform - now representing around 24% of total sales - driving strong sales growth.

In March, Myer’s shareholders received their first dividend since 2017 and the company expects to release its FY22 results during September.

It appears shoppers kept spending post-Christmas trade with, which was hampered by store closures.

Commenting on today’s update CEO John King notes the continuation of sales growth into the second half, after a tough first half year, with the first quarter heavily impacted by store closures and declining consumer confidence.

King reminded investors that the Customer First Plan is continuing to deliver positive outcomes for the business, with all categories achieving sales growth over last year.

“The momentum in the second half in terms of sales growth both in-store and online, profitability and strengthening of our balance sheet places us well as we go into the new financial year,” noted King who embarked on a turnaround strategy five years ago.

While stock on hand is nearly 10% higher than the same time last year, after bulking up inventory to offset global supply chain delays, management notes clearance inventory continues to be well managed at 6.2% of department store stock on hand.

Today’s result should go some way appeasing major shareholder and Melbourne-based billionaire Solomon Lew (20%) who has agitated to see the board changed following disillusionment about company’s previous ailing performance.

At the half year King also noted that having grown nearly fourfold in the past four years, Myer is now one of the biggest online retail businesses in the country.

“In key categories, our growth is significantly outpacing competitors, both multichannel retailers and online pure plays.”

Consensus on Myer is Hold.

Based on Morningstar’s fair value of $0.76 the stock is undervalued. 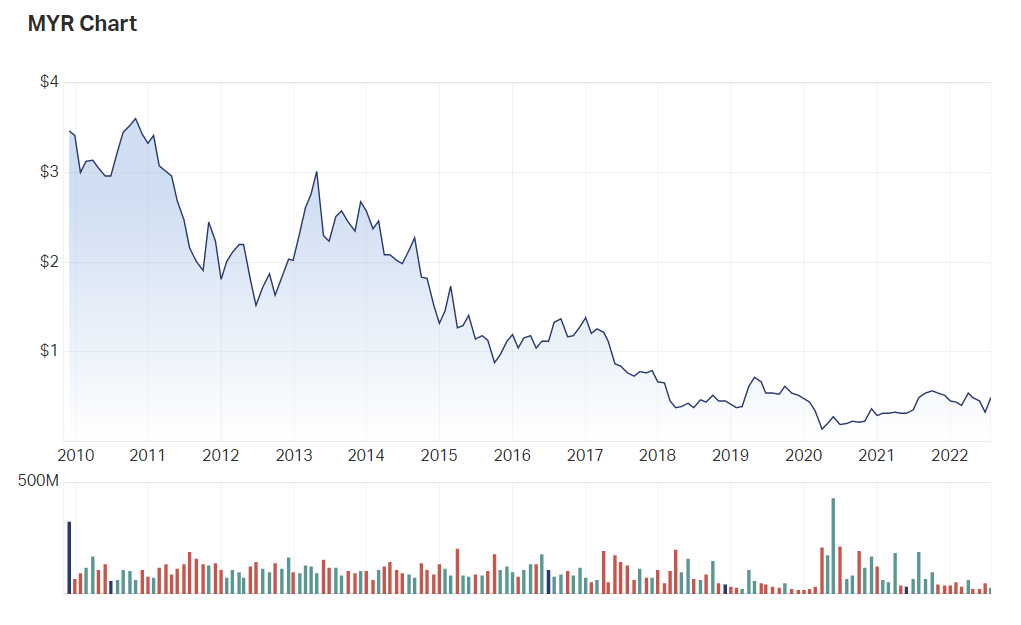 A snapshot of Myer's share performance over the longer haul.