Shares in the office, retail and logistics property group GPT Group (ASX: GPT) are off -21% since pre-covid days, and nearly -5% since February 13, when the REIT released FY21 results that came in below consensus forecasts.

The negative market reaction since has prompted broker Macquarie to upgrade its rating on the stock to Outperform, from Hold.

While increasing to $5.47 from $5.37, the broker admits that the price target looks conservative, especially in light of in headwinds in retail and office and the potential for further upside from the REIT’s logistics unit.

Funds from operations were flat over FY21 compared to FY20, at $554.5m, as new covid variants appeared in the second half and strangled a nascent recovery in capital city CBDs last year.

Costs in FY21 increased by 80%, to $66.4m, due to the higher insurance premiums, the lack of jobkeeper benefits compared to 2020, and several accounting changes.

Management guides to 10-12% improvement in FY22

CEO: Worst ‘now behind us’

CEO Bob Johnston said the FY21 result reflected another year of covid tenant rent relief, but the worst was now behind the REIT.

“We expect our retail portfolio performance will once again recover quickly as community confidence lifts, and we are starting to see evidence of this over the last couple of weeks.”

In the office segment, which accounts for about 38% of GPT’s assets, Johnston said jobs and economic growth in Australia meant continued competition for talented staff.

“While hybrid work practices are being embraced by most companies, the physical workplace will remain important for organisations to attract talent and shape culture.” 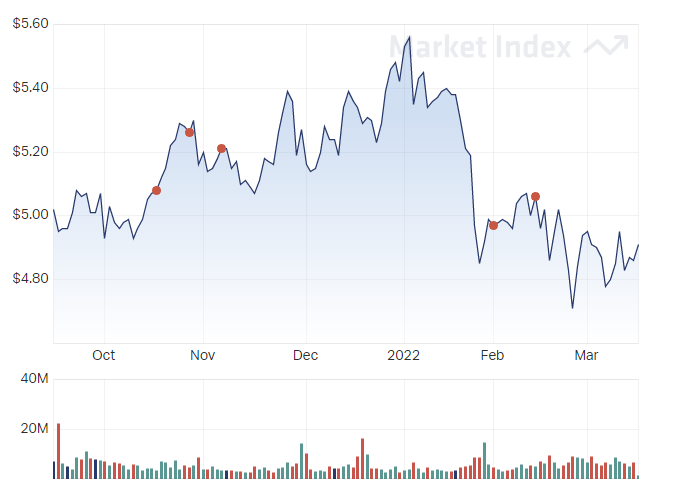 Citi: The broker was disappointed with the FY21 results, which were below consensus. New FY22 guidance came in -3% below consensus. The broker expects cashflow from retail and office assets to be weaker than the group expects, although logistics assets should remain positive. Citi maintained its Neutral rating, with a lower target price of $5.37.

Morgan Stanley: Noted both FY21 actual and FY22 guidance funds from operations were lower than it expected. The broker is concerned over continuing “quiet” CBDs and growing costs at GPT but saw potential upside in some assets. Morgan Stanley retains its Equal-weight rating and target price of $5.51.

Ord Minnett: The FY21 result was “broadly” in line with expectations, with lower interest costs offset by higher corporate costs. The broker retained its Hold rating and its $5.70 target price.