Following 93% approval by shareholders on May 12 for the $11bn demerger, Tabcorp Holdings' (ASX: TAH) de-coupled entity The Lottery Corporation (ASX: TLC) is expected to commence trading on the ASX on Tuesday, May 24.

It’s understood the Lottery Corporation will then be added to the S&P/ASX 200 Index effective prior to the open of trading on May 24, 2022 at a zero price.

The demerger would then be implemented on June 1.

With six operating businesses spread across three divisions, Tabcorp concluded that a demerger was “the most certain and timely path to maximise value for Tabcorp shareholders, with lower regulatory impediments’’.

Tabcorp will re-emerge as a media/wagering entity, including gaming services businesses trading under the banners of TAB, Sky Racing and MAX.

Management regards the split as an important milestone in repositioning the group’s portfolio, especially given investor disappointment over Tabcorp’s failure to deliver on any growth following failed merger talks.

More M&A around the corner

Based on independent valuations, New Tabcorp’s wagering, and media arm alone is expected to have a value of between $2.1bn to $2.7bn. This is well under bids of between $3bn and $4bn from multiple suitors rejected by Tabcorp last year.

However, the demerged entity is expected to attract some those same suitors (plus others) back to the bidding take table going forward, while M&A interest in the soon-to-list Lottery Corporation is also expected within short order.

While New Tabcorp is expected to have under $100m of net debt – following a shift of debt to Lottery Corporation – it also comes with a $950m revolving loan facility.

Given the deregulation of the US wagering industry, management may start eyeballing this market for likely acquisitions.

By comparison, Lottery Corporation is expected to have an opening net debt balance of around $2.1bn, with the company targeting a debt-to-equity ratio of 3.5-4.0. 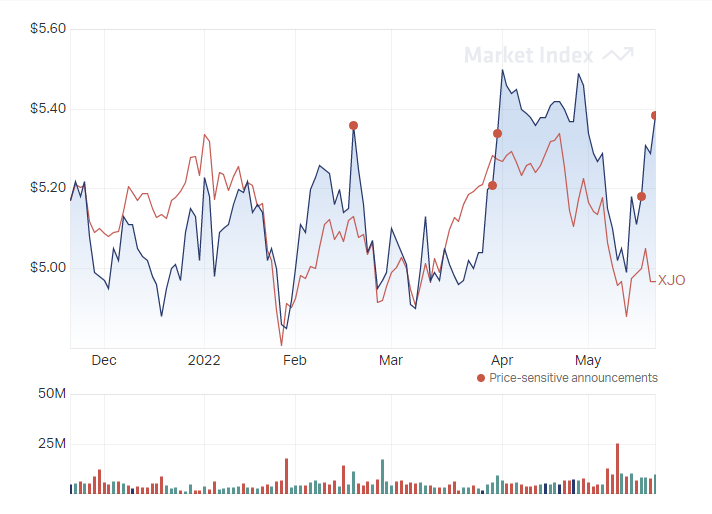 While Tabcorp’s share price gained 6.55% last year, the share price today ($5.37) is trading at near-identical levels to where it was mid-December 2017.

Consensus on Tabcorp is Strong Buy.

Based on Morningstar’s value of $5.15, the stock appears to be fairly valued.

Based on the brokers that cover Tabcorp (as reported on by FN Arena), the stock is currently trading with 9.0% upside to the target price of $5.83.

Macquarie believes the Lottery Corporation business within Tabcorp is undervalued, especially given the infrastructure-like qualities and growth outlook.

While this is yet to materialise, much of this could be attributed to a skittish market, with much deeper concerns on its mind right now.

In light of capital adequacy concerns within Wagering & Gaming, due to the potential capital required for licence opportunities, the broker retains an Outperform rating, yet lowers the target price to $6.10 from $5.95.

While the Scheme booklet also warned of potential litigation risk, the broker expects that to be offset against the opportunity to harmonise wagering industry fee structures.

The broker believes the 10% lottery revenue increase in the March quarter, substantiates a target price increase to $6.20 from $5.70 and a suggested return of more than 15% in the next year.

Meantime, on April 1 Ord Minnett suggested investors contemplate the value of the media business within 'New Tabcorp', before disposing of the wagering and media arm. Oops too late now.

The Hold rating and $4.90 target price were maintained.