Having endured yesterday’s -40.6% pummelling, BWX (ASX: BWX) shareholders woke today to discover that the sell-off hadn’t finished, with the share price down another -4.32% at the close to a new low of $0.665.

What disturbed the market yesterday was news that the Andrew Forrest-backed skincare group’s capital raise was offering new shares at a 48.7% (not a misprint) discount to the stock’s previous closing price.

Accompanying what is clearly an urgent need for balance sheet repair was a severe cut to revenue forecasts for FY22 to $206m from $243m.

Projected earnings were also cut by two-thirds to $10m, while the company expects to post a FY22 after-tax loss of between $10m and $14m.

What does BWX do?

To the uninitiated, BWX develops and manufactures wellness products including skincare and make-up brands like Sukin, Andalou Naturals and Mineral Fusion.

In what will go down as one the great ASX-listed understatement for 2022, management noted that retail conditions over the past six weeks had become increasingly challenging as inflation and interest rates charged higher and created a “more cautious consumer”.

Management advised that challenging market conditions forced a need to rethink their approach.

“Our plans assumed selling into and holding a certain level of inventory with select wholesalers and retailers in June.”

Did this challenge suddenly materialise?

Shareholders have every right to both vent anger at these outcomes and point the finger at the ASX for seemingly lax continuous disclosure governance.

Either management was holding something back, or the last six weeks were of Gone-With-The-Wind proportions.

To put the current sorry state of affairs in context, at the interim last February, the company reported $85m of debt and $58m of cash, net debt of only $27m, while interest expenses came in at around 10% of operating profit.

What a difference six months makes

Fast forward to late June, and guidance has not only haemorrhaged, debt covenants have by some bizarre twist of fate triggered one hell of a capital raising.

Exactly how much money the company has left at the end of all this could possibly shed some light on:

The company plans to issue 38.6m new shares – that's one new share for every four that currently exists - at 60 cents per share. This marks a goliath discount to its last close on June 23 of $1.17.

Shareholders have – between 4 and 13 July - the option of buying one new share at $0.60 each for every 10 shares already owned.

At the end of the current offer, substantial shareholders, Bangarra Group and Andrew Forrest’s Tattarang are expected to own at least 44%, up from 34%.

It’s understood $10m of the capital raise proceeds will go to the Commonwealth Bank (ASX: CBA) which has agreed to suspend financial reporting obligations on the company’s loans until the end of September. How nice.

Sukin to the rescue

On a rosier note, the company’s Sukin brand experienced 24% sales growth in the recent quarter.

Interestingly, while management has guided to revenue of between $260m and $270m, and operating profits of between $45 and $49m for FY23 – around four times FY22 levels – it will be interesting to see if the market/brokers take it seriously after the recent fiasco. 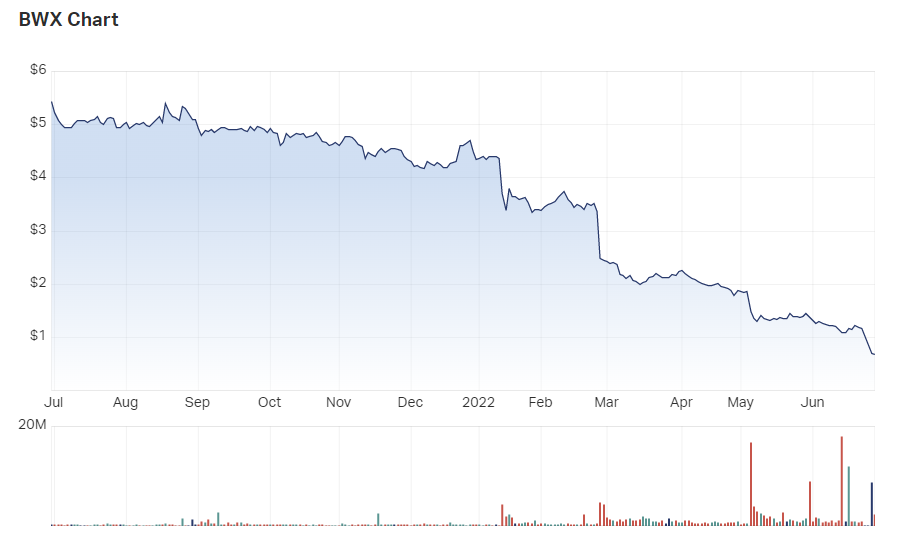 The BWX share price is down -87% over one year.

Consensus on the stock was Moderate Buy.

Based on Morningstar’s fair value of $3.59 the stock appears to be undervalued, however, this may look different by the end of the week.

Following today’s guidance, Citi has downgraded BWX to Neutral from Buy and slashes its target price to $0.75 from $2.76 after a change in valuation methodology.

Macquarie has also downgraded to Neutral from Outperform and the target price decreases to $0.70 from $2.20.

Given that the stock has never looked cheaper, Intelligent Investor is happy to own the stock for the long-term.

The fund manager rates the stock a Speculative Buy below $1.50.