Growthpoint Properties (ASX: GOZ) was up 3.11% at the open after the large-cap REIT revealed greater exposure to government covenants in strategic urban locations through the purchase of Government Service Office building in Dandenong for $165m from Dandenong GSB.

The 15,071 sqm property with ground floor retail, seven floors of A-grade office accommodation is 99.7% occupied, including a lease deal with the Victorian government with a long weighted average lease expiry (WALE) of 9.5 years.

Subject to the approval of the Foreign Investment Review Board (FIRB) approval, the REIT expects the settlement to occur in the coming weeks and expects it to be accretive to FY23 funds from operations (FFO).

The acquisition will be funded using debt and is being acquired on a 5.3% initial income yield.

Today’s announcement follows the REIT’s recently released third quarter FY22 trading update which was highlighted by a continued improvement in national office tenant demand, with effective rent growth recorded in all major markets and a decline in vacancy rates (except in Perth).

During the quarter, Growthpoint entered into eight leases across its office and industrial portfolios, representing 6.0% of portfolio income. The WALE of the new leases was 5.6 years and the weighted average rent review was 2.8%. 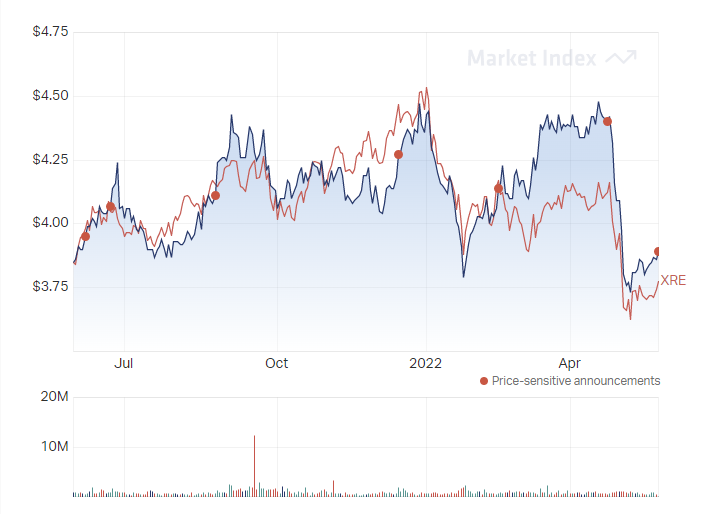 Consensus on Growthpoint is Hold.

Based on Morningstar's fair value of $4.10, the stock appears to be undervalued.

Based on the three brokers that cover Growthpoint (as reported on by FN Arena) the stock is trading with 13% upside to a target price of $4.36.

While Ord Minnett can see emerging value in the REIT sector, due to a stabilisation of long-term bond yields and moderating market cash rate assumptions over the past few weeks, the broker lowers its target price to $4.00 from $4.20 and maintains a Hold rating. (27/05/22).

Macquarie regards the REIT’s portfolio as solid and resilient in the face of the pandemic, and retains an Outperform rating, target rises to $4.63 from $4.45.