If economists are reading the tea leaves correctly, the subtle, yet poignant change in Reserve Bank (RBA) rhetoric is now pointing to a rate rise a lot earlier than originally expected.

UBS economists are among a growing cohort that believe the first interest rate rise in almost a dozen years – a 15 basis points rate hike to 0.25% - is now on the cards in June.

What makes economists so confident of a rate rise is the mood change alluded to within the central bank governor Philip Lowe’s statements on Tuesday.

Now missing from Lowe’s previous stance on interest rates is a notable absence of any former reference to the dovish forward guidance embedded within the phrase “prepared to be patient”.

Yesterday’s comments by the RBA suggest to UBS a greater-than-normal risk of moves and the broker expects further 25bps hikes in first half 2023 and second half 2023, to 1.25%.

"Our detailed analysis shows market pricing of 3.25% by end-2023 would increase household interest payments so sharply that it would likely crash the housing market and cause a recession."

Meantime, a 3.5% CPI increase in the December year - with more to come in the March quarter – appears to have convinced financial markets that a cash rate of 1.75% is on the cards by year’s end and 3% by August 2023.

When data on consumer prices comes out 27 April there’s a growing expectancy that core inflation will have jumped by 1%-plus in the first quarter, which without putting too fine a point on it, will lift the annual pace to at least 3.2%.

Assuming that’s the case, it would be first time core inflation has nudged beyond the RBA’s 2-3% target band since early 2010 – which makes keeping rates at emergency lows at little hard to justify.

AMP chief economist Shane Oliver also believes the RBA is now prepped to go earlier than expected, and isn’t ruling out an initial 0.5% rate rise, before moving to 1% by the end of the year.

While highly unlikely, Oliver suspects March-quarter inflation data, which is likely to be high, will heighten talk of rising rates through the federal election campaign in May. Historians among you will recall that rate rises during an election are not unheard of - with Governor Stevens increasing rates during the 2007 election campaign.

The market reaction to Lowe’s about-face in sentiment was swift with the Australian dollar adding more than half a US cent – to a nine-month high - within minutes of the RBA’s statement, while the benchmark S&P/ASX 200 was -0.6% lower an hour later. 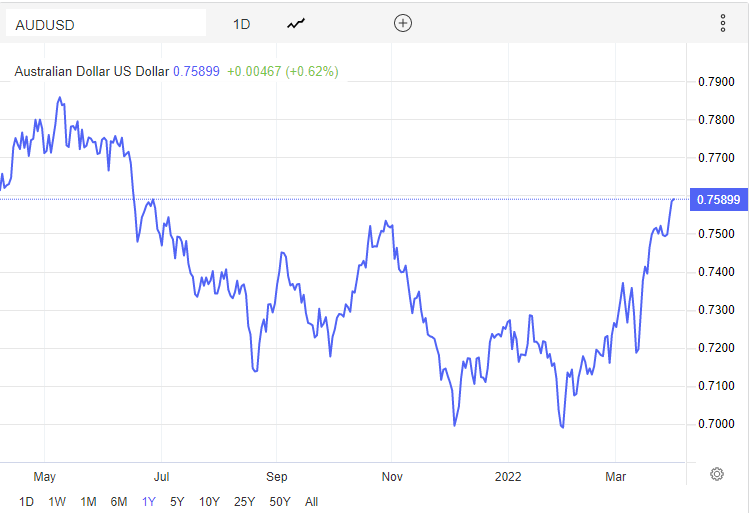 The Australian dollar was at a nine-month high yesterday against the US$.