Graphite may emerge as a preferable EV mineral; 5 ASX players to watch

Essential battery metals including cobalt, nickel, manganese and graphite have yet to receive the same amount of publicity and price rallies as high-flying lithium.

In an unexpected turn of events, lithium stocks have sold off sharply this week in response to downbeat broker notes, Argentina setting a reference price for lithium sales and a Chinese battery manufacturer buying six African mines - enough for a decade worth of production.

Credit Suisse analysts briefly mentioned that “graphite may emerge as a preferable EV mineral exposure to Li, we think, as it has not yet seen the rapid degree of supply response witnessed in lithium.” 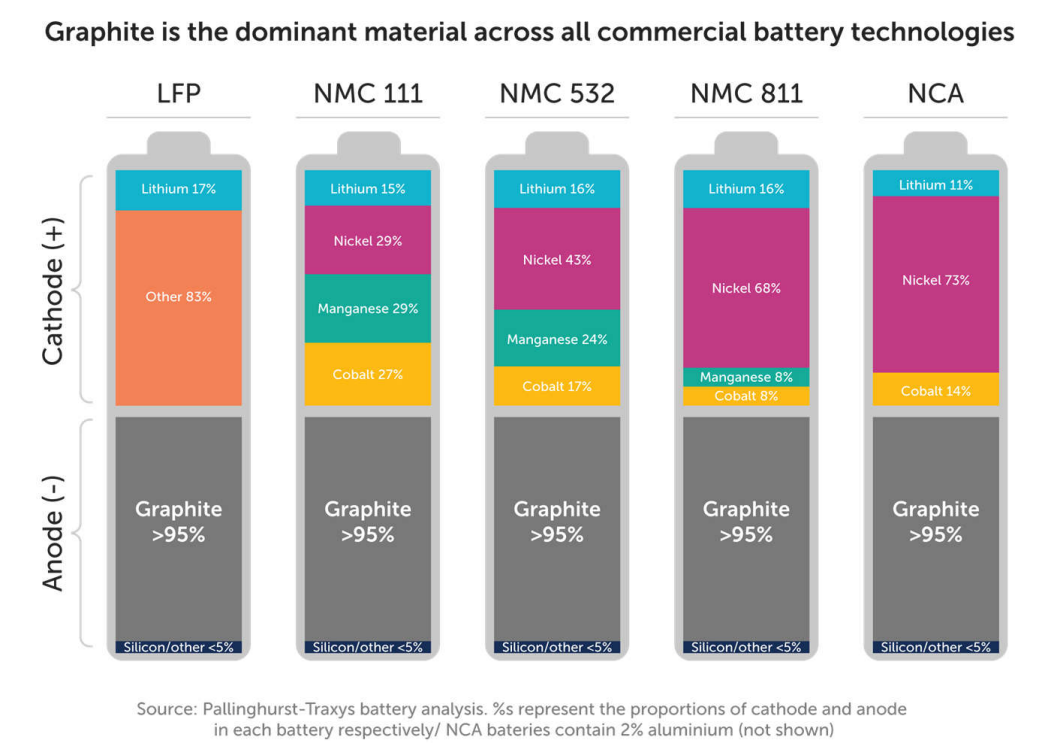 There's not much to choose from towards the large end of town, with Syrah Resources (ASX: SYR) as the main pure play graphite option.

Syrah operates the Balama Project, which it considers to be the largest natural graphite mining and processing operation globally.

Balama recommenced production in March 2021, producing 72,000 tonnes of graphite in 2021. The operation has the capacity to produce around 350,000 tonnes per annum.

The mid cap space is again, lacking breadth, with notable players targeting production over the next few years.

Renascor Resources (ASX: RNU) is an emerging $500m mcap graphite and anode player. The company has a mine-to-market supply chain, producing graphite from the Siviour Deposit in SA and processing the production at a to-be-determined nearby manufacturing facility.

Siviour is targeting 28,000 tonnes per annum of graphite concentrate as part of its Stage 1 production. A final investment decision for the project is expected to be made this year.

Talga Group (ASX: TLG) trades at a $430m market cap and operates a similar integrated mine-to-market model. The company's Vittangi mine is scheduled to produce approximately 100,000 tonnes per annum of graphite ore and commencement for mining is planned for 2023.

Small cap graphite names can feel underappreciated at times, as they might not necessarily lag behind mid cap players in terms of resource, targeted production and net present values.

Black Rock Mining (ASX: BKT) is developing the Mahenge Graphite Mine in Tanzania. The company is targeting 83,000 tonnes per annum as part of its 'Module 1' production.

In April, Black Rock said it plans to complete a number of "important de-risking milestones over the next 6 months" including full form agreements with offtake partners, project funding milestones and kick off construction in the third quarter of 2022.

Evolution Energy (ASX: EV1) is the smallest of them all, with a market cap of just $53m. The company operates the Chilalo Project in Tanzania, which is targeting 50,000 tonnes of graphite concentrate per annum.

A final investment decision is expected to be made in the fourth quarter of 2022.