Encouraging result for Auroch Minerals: Shame about the timing

Revelations earlier this week by Auroch Minerals (ASX: AOU) that re-assaying of previous drill holes has confirmed the presence of lithium mineralisation at the company’s Nepean project, would typically have been sufficient to give the stock a decisive nudge forward.

But the company received a rude reminder of what can happen when the winds of market sentiment turn without warning.

Having rallied in the past three weeks, lithium stocks were down by up to -15% this week, with hawkish signals by the US Federal Reserve (Fed) dominating market sentiment.

Whether the Auroch share price will eventually price in yesterday’s good news remains to be seen.

But in the great scope of things, the announcement was a good one, with the company announcing that lithium mineralisation was identified in the pegmatite intersections.

As well as confirming the presence of LCT-enriched pegmatites throughout this northern area, Platel also noted the potential for these pegmatites to host lithium mineralisation.

“We are encouraged by these assay results from the pegmatite intersections in the four drill-holes in the northern area of the Nepean tenure,” Platel said.

“This growing potential for significant lithium mineralisation compliments the company’s primary focus on its high-grade nickel sulphide projects in Western Australia, as the company looks to leverage the ever-increasing demand for critical minerals for the renewable energy sector.”

Follow-up exploration by Auroch is expected to include drilling to delineate further LCT mineralisation in the area.

Lithium exploration at Nepean aside, before the end of April Auroch expects metallurgical test-work on shallow, near-mine nickel sulphide potential to be completed.

Metallurgical test work will commence on composite drill core samples, while planning and budgeting has commenced for systematic exploration programs for zinc, copper, lithium and rare earth minerals at the Arden zinc-copper project. 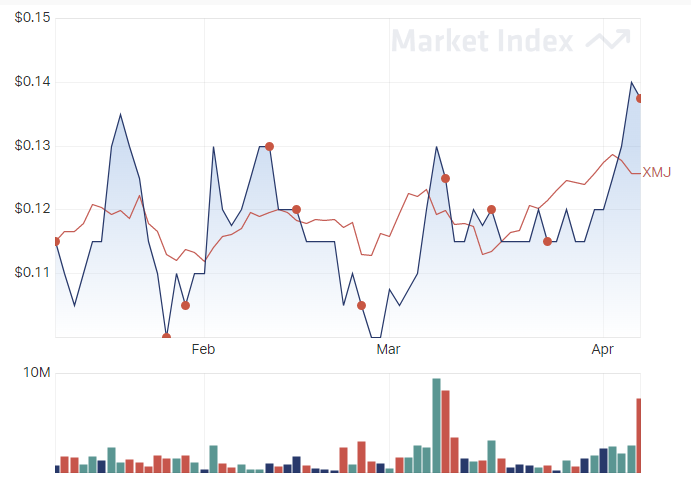 The Auroch Minerals share price has outperformed the materials index over the last three months.