WA1 Resources (ASX: WA1) is the latest exploration hopeful to list on the ASX after successfully raising $4.5m at 20 cents per share. 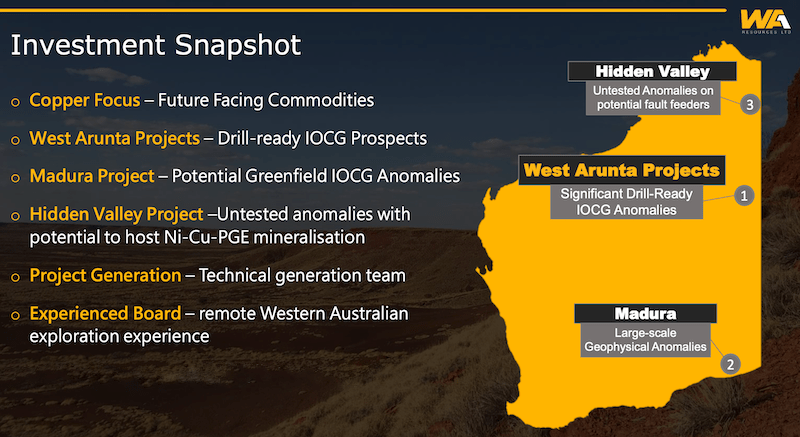 BHP's (ASX: BHP) Olympic Dam is arguably the most well-known IOCG project with one of the world's most significant deposits of copper, gold and uranium.

WA1 has a proposed two-year exploration budget of $1.4m and hopes to hit the ground running by targeting "significant drill-ready IOCG anomalies”.

The Madura Project tenements are located along the WA south coast.

The company's prospectus states that WA1 intends to undergo “immediate diamond drilling of any identified targets as generated by the newly acquired geophysical data and interpretation work based on them.”

The Hidden Valley Project has seen historical exploration for various commodities, with strong indicators for gold, base metals and nickel mineralisation.

The prospectus views the area as one that has “not been adequately assessed for magmatic-Ni (Cu) sulphide mineralisation, of which there is good potential”.

Early stage exploration activities at Hidden Valley will aim to surface its potential for gold and base metals mineralisation.

The Project is still pending a land access agreement with the local Kimberley Land Council.

Investors can expect a busy schedule for WA1 as it attempts to uncover a significant mineral system at West Arunta.

In addition, the company aims for initial exploration activities at Madura and Hidden Valley to translate into future drilling targets and drilling activities.

Bullish copper prices will also sit in the backdrop of WA1's exploration activities.

The Australian Government's commodity forecaster, the Office of the Chief Economist expects copper to enter a strong demand phase, supported by the global long-term transition to renewable energy technology and battery storage.