China somewhat gave up on its 2022 GDP growth target of 5.5%, with officials saying the figure is more of a guidance rather than a hard target, Bloomberg reported.

More specifically for iron ore, a Mysteel monthly report stated that "Chinese demand for iron ore will likely see some recovery this month, with some domestic steelmakers having plans to gradually lift production, but the room for growth might still be relatively limited."

Mysteel data showed that over 22-28 July, daily hot metal production among 247 Chinese steelmakers had fallen to an average of 2.14m tonnes per day, the lowest reading since late February.

From a supply perspective, the report warned that Chinese iron ore production is expected to rise further in August as "many miners will need to lift their production ... to fulfill their annual production guidance."

"Under this scenario, Mysteel still highlights the possibility of an oversupply in the country's iron ore market, which will see the total inventories at China's ports continue to climb during the month."

The topping out of Treasury yields and the US dollar allowed gold to bottom and find some upside.

Gold is poised to rally for a third straight week and trying to test the psychological US$1,800 level.

From a technical perspective, the price has broken above the bear channel and reclaimed the 50-day moving average.

Friday night could see some volatility for gold as the US will report its closely watched unemployment and non farm payroll data. Most central banks are becoming more data dependent to try and balance the recession and inflation risks.

Not so much related to lithium prices or stocks, but Australian lithium exports hit a record high of $1.16bn in June, up 1,189% a year ago, the Australian Bureau of Statistics reported.

The increase was driven by the doubling of exports and a more than fourfold increase in prices. 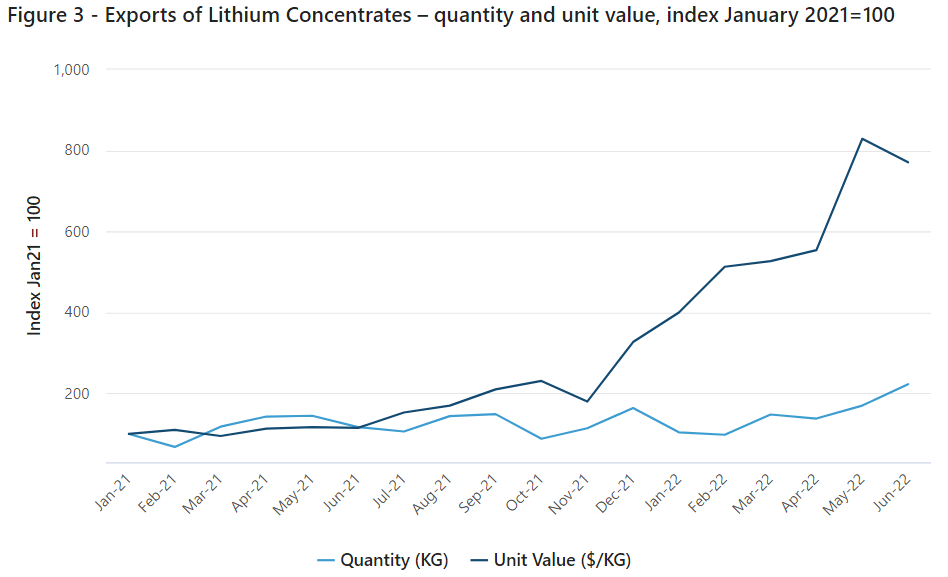