Why the Russia-Ukraine is a risk on commodities

Russia plays a dominant role in global commodity exports, almost too much for comfort. 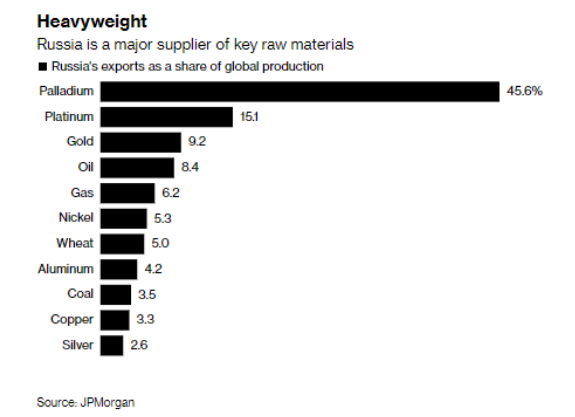 In the early hours on Thursday, the US and its allies announced a second round of sanctions targeting Russian banks and technology, prompting a sharp reversal for the basket of commodities.

Brent crude prices fell back below US$100 on Friday morning after the Biden administration announced they will tap into strategic oil reserves if necessary.

“Energy traders were a bit over aggressive in expecting prices to accelerate beyond the century mark and will likely see a whipsawish market for quite some time,’ said Oanda senior market analyst, Ed Moya.

“The oil market remains tight and potential for an extended military conflict is growing and that should keep oil prices above the US$100 level over the short-term.”

Brent crude has reclaimed the symbolic US$100 level as at 4:00 pm AEDT, as more Russia-Ukraine updates come through.

Gold briefly spiked to US$1,974 on Thursday, but like all other Russian-related commodities, fell quickly back to earth.

“Gold’s afternoon selloff accelerated after President Biden unveiled the next round of sanctions, which many thought were not hard-hitting enough given last night’s Russian invasion of Ukraine," said Moya.