After releasing strong first-half FY22 results in February that nonetheless spooked the market, prompting a -32% fall in stock price, analysts are beginning to re-assess City Chic (ASX:CCX) prospects, with its cheaper valuation and US growth at the forefront.

The plus-sized women’s clothing retailer’s decision to defend against possible supply chain disruptions, by heavily boosting inventory levels, was seen by the market as too risky.

The selloff was also linked to City Chic’s FY22 trading update, which mentioned “challenging” conditions in its Australian stores in the first few weeks of the half, and “subdued” online sales growth in the US and Australia in comparison with the prior period.

But some brokers now say the stock has been oversold, with City Chic’s consensus target price of $5.18 representing average upside potential of 52.4%.

Among the brokers reassessing the situation is Morgan Stanley, which kept its $5 target price and had earlier expressed concern over increased capital spending on inventory.

City Chic’s inventory value has nearly doubled since the end of FY21, to $125.7m, with about $30m of this as “accelerated inbound” stock - additional stock purchased as a surety against supply chain disruption.

In a March 14 report, the broker notes that even though the jump in inventory increased risks, the stock’s fall of circa -40% so far this year meant City Chic is now “too cheap”.

The broker also believes that City Chic management is capable of successfully executing the higher inventory strategy, given its past track record.

Both Citi and UBS note that slightly higher than expected fourth-quarter sales at City Chic’s US competitor, Torrid, bodes well for the Australian group.

First-half FY22 earnings was a beat

Growth in the US made the biggest contribution, with $29.5m on the increased earnings (EBITDA) coming from America. Overall, revenue from the US increased by 65% on a constant currency basis. 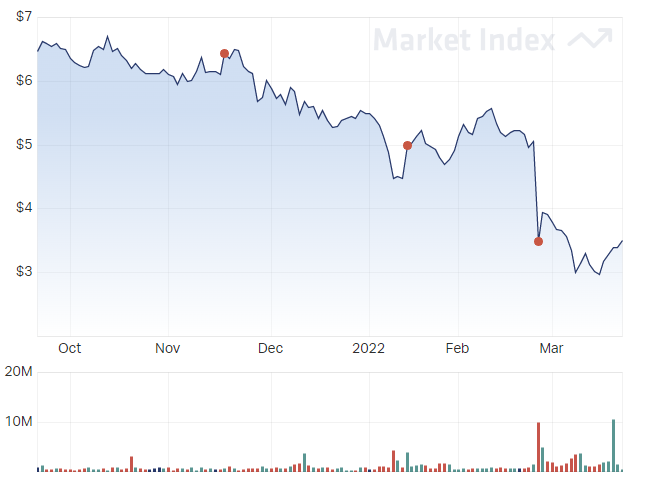 The last six months have not been kind to the City Chic share price.

The consensus is a Buy recommendation, with an average target price of $5.18 (upside potential of 52.4%).

Citi: The broker noted that key US competitor Torrid expects positive sales momentum, while data showed City Chic outperformed its US rival in February. Torrid is upping its marketing spend, however. Citi retained its Buy rating, with a target price of $4.

UBS: City Chic is poised to gain US market share, and also has better supply chain management and diversified product sources. The broker retained its Buy recommendation, with a target price of $5.

Macquarie: City Chic has invested to build up inventory as a defence against supply chain disruptions. Overall, first-half FY22 earnings were in line with expectations. The broker retained its Outperform rating, with target price reduced to $6.70, from $7.10.