AVZ Minerals (ASX: AVZ) share price rose by around 14% to $1.15 at the open, but quickly gave back its early morning gains and was down -17.17% two hours out from the close, despite a positive update on its African lithium exploration project.

Today’s announcement had previously been flagged to the market, with the company recently deciding – due to its confidence receiving all necessary approvals - to invest $25m in an early works program.

Today’s conformation that the group received a ministerial decree to award the mining licence for its Manono project is regarded as “leading to a watershed moment" for the large-cap miner and its project partners.

To the uninitiated, AVZ Minerals is a mineral explorer focused on developing the Manono Lithium and Tin Project located in the south of the Democratic Republic of Congo.

The company has a 60% interest in the Manono Project and 15% under Option from Dathomir Mining Resources.

What has been awarded

Today’s release reveals that the Minister of Mines has awarded a mining licence to AVZ’s 75% owned Dathcom Mining SA business for the flagship Manono Project.

The mining licence will cover the entirety of the Roche Dure mineral resource (401m tonnes at Li20 1.65%) and the Carriere de l’Este exploration target.

While the licence does not include a portion of the land holding to the north, the company plans to have ongoing discussions with the government regarding its future inclusion.

AVZ’s managing director Nigel Ferguson expects today announcement to pave the way for the company to start developing what he regards is one of the most important new mining projects in the world - that will contribute to the global green energy transition.

“We have maintained a strategic approach to developing our world-class Manono Project and we will continue to tick every box that will deliver long-term value to what we believe is the largest global hard-rock lithium resource, based on current Proved and Probable Ore Reserves.”

The company is advancing its early works program ahead of a final investment decision to commence major works and first SC6 production toward the later months of 2023.

Given the company’s cash burn of $42m equates to around 1.1% of its $3.7bn market cap, the stock also appears to be well positioned to fund future growth.

Why the rise and fall today

Given that today’s announcement was seen as somewhat of a rubber stamp, some investors clearly saw today’s rise as an opportune time to take profits off the table, especially with the share price up 471% in the last 12 months.

Having considered each of the Dathomir Claim and Cominiere Transfer Claim in detail, the company believes them to each be spurious in nature, without merit, containing fundamental and material errors, and having no substance or foundation in fact or law.

“The Company is continuing to take all necessary actions to resist these vexatious and meritless claims and to protect Dathcom’s and its interests, and the Company will consider all options including engaging with the DRC Government and seeking international law remedies," management noted.

Consensus does not cover AVZ Minerals.

Based on Morningstar’s fair value of $1.12, the stocks appears to be undervalued.

While the company reported revenue of $927,000 last year, none of which came from operations, some analysts expect earnings to virtually double p.a. 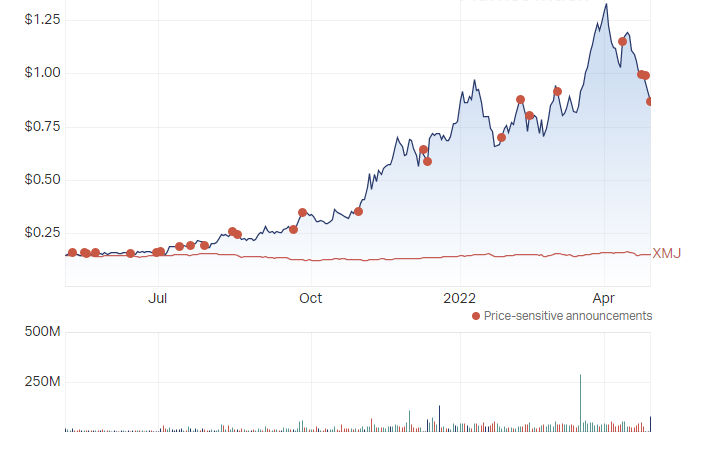