ASX dogs of war to have in your crosshairs

Due to a perceived existential threat to Australia from China, the country’s spending on defence - now forecast to reach 3.5% of GDP by the end of the decade – has by default put greater focus on ASX-listed defence stocks most likely to benefit.

The federal government's 2020 Defence Strategic update noted a commitment to increase defence spending from $70bn to a whopping $270bn over the next 10 years.

As well as border protection, much of the major ramp-up in defence spending is also being spent on Australia participating in the ‘Five Eyes’ intelligence sharing network under a joint treaty with Canada, NZ, the UK and US.

There’s a growing cadre of ASX companies - ranging from satellite data and drone systems companies to military equipment suppliers and shipbuilders - with connections to the Australian defence sector.

Everything being equal, there are around a dozen-plus listed companies – with a combined market cap of over $4.0bn - that could be direct beneficiaries of increased military spending.

But investors should note, while the sector at large looks cheap, earnings are expected to grow by around 20% p.a.

While 70% of the Australian government’s defence spending is expected to go to foreign suppliers, there remains a sizeable pool for local suppliers to fight over. 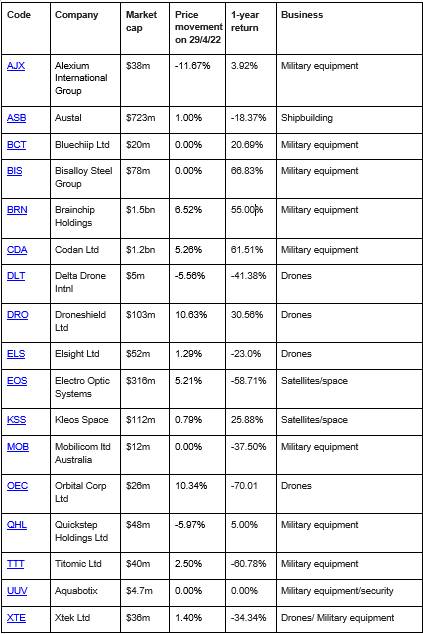 While Brainchip and Codan have posted 1-year gains of 55% and 61% respectively, size and performance clearly aren’t mutually exclusive, with Austral down -18.37% over the past 12 months.

By comparison, the best performing defence stock over past 12-months is smallcap Bisalloy Steel Group (ASX: BIS), up 66.83%.

Due to their size, consensus fails to cover the vast majority of stocks in this sector. However, based on Morningstar’s evaluation, every stock within the defence space is undervalued.

Unlike a lot of its peers in this space, Codan is highly profitable, and in FY21 the company grew net profits by 41% to $90.2m.

Friday’s share price recovery ($7.20), after being dragged down by the tough love recently dished out to the tech sector, is welcome relief to the stock’s slide from the $19.41 high it was trading at mid-June last year.

Macquarie has an Outperform on the stock and shares the company’s confidence it can significantly grow future profitability. The broker's target price of $11.60 represents a 62.5% upside to the current price.

Based on the four brokers that cover Austal (as reported on by FN Arena), the stock is trading on 8.4% upside to the target price of $2.19.

Citi retains a Buy rating (target price of $2.35) and expects several shipbuilding projects to be awarded this year.

By comparison, Macquarie recently downgraded the ship builder to Neutral from Outperform (target $1.91) after the company was notified it will not be awarded the contract to construct offshore patrol vessels for the Philippines Navy.

Meantime, Credit Suisse has cut revenue estimates due to a softer US contribution, given labour shortages and global supply chain disruptions, but retains an Outperform rating (target trimmed slightly to $2.40 from $2.50).

Given the lack of broker analysis on defence stocks, it’s incumbent on you to watch out for any price sensitive announcements that could add a major kicker to the fortunes of any stocks within this sector.

For example, given the massive change in how the Australian military is adopting drone technology, stocks in this space are likely to receive their fair share of future government contracts.

If the Russian/Ukrainian war is any proxy, the deployment of small drones for battlefield surveillance is on the rise.

Australian government contacts aside, Quickstep Holdings (ASX: QHL) has etched out a niche in the global aerospace and defence sector by supplying the likes of Boeing with several composite parts for the F-15 and F-18 military aircrafts.

But despite delivering a solid first half, with underlying pre-tax profit up 82% to $2m, the stock is only up 5% over the past year.

Bisalloy Steel Group’s strong set of fundamentals all point to the quality of its underlying earnings, which for stocks within the defence sector is rare.

To the uninitiated, the company produces different types of steel including armour plate for Australia’s ballistics, defence, naval, vehicles market and for overseas customers.

The company paid an interim dividend of 4.5 cents per share.

The stock last rallied from $1.46 24 February to $1.79 following the first half FY22 result which saw operating earnings and net profit up 86.7% and 131.8% on the previous period respectively.

The result was characterised by global and domestic steel prices at or near record highs.

The company expected the strong demand for quench and tempered steel plate to remain strong during the second half of FY22.