Against the backdrop of war in Ukraine, Goldman Sachs is witnessing a renewed focus on energy security as Europe grapples with how to restructure its supply to reduce its reliance on Russia.

What the crisis has exposed, adds Goldman’s is the challenge ahead for the world as it confronts the geopolitical conflict, efforts to decarbonise and high global inflation.

With the energy industry now at a turning point, Michele Della Vigna, head of Goldman Sachs’ natural resources research in EMEA expects to see increased investment across commodities, including oil and gas.

Within Top Projects 2022, which Goldman's has been publishing for nearly 20 years, the broker enlightened investors on what underinvestment in energy over the last seven years has this meant for the sector. 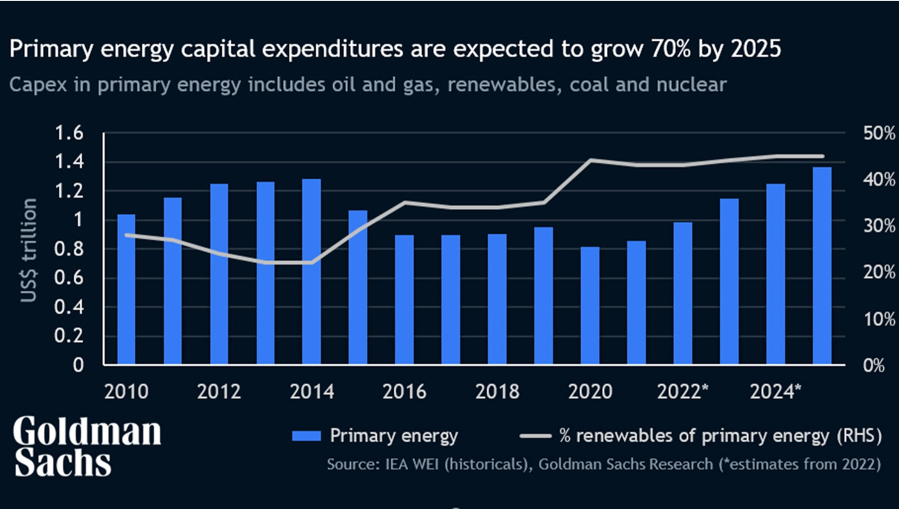 When explaining the depths of the underinvestment witnessed since 2015, Della Vigna noted:

Reserve life in the sector: Which used to be 50 years has now declined to 25 on the back of falling oil reserves and increasing production. He attributes the lack of focus in exploration and resource expansion to the push for decarbonisation.

“If we had not kept delaying new investment decisions in oil and gas since 2014, we essentially could have had a new Saudi Arabia and a new Qatar,” Della Vigna said.

Billion-dollar numbers: In upstream oil and gas, the industry at the peak was spending $900bn per annum. By comparison, this troughed at $300bn dollars in 2020 - whopping two-thirds reduction in capex.

“We have exhausted all of the spare capacity in the system, and now we are no longer able to cope with supply disruptions like the one we are currently witnessing because of the Russia-Ukraine conflict,” Della Vigna notes.

While Goldman’s is witnessing greater investment in shorter cycle projects like US shale, the broker also expects the pace of big oil and gas decisions to triple over the next three to five years versus that witnessed at the trough of the cycle in 2020.

At the current cost of capital, the broker estimates the need for $90-per-barrel oil prices in order to get enough capacity on stream.

Given its transportability by ship, Goldman’s see LNG as the obvious substitute of scale to Russian [gas] imports.

The broker believes Europe can get more of this energy by either outbidding current recipients like India and China or getting new LNG to come to the continent.

“The problem with that is it takes four to seven years for new LNG projects to start production (from investment decision), so it’s a very delayed answer to current higher prices,” the broker explains.

“Our analysis shows there are not many projects coming on stream until 2025, which will make it very expensive for Europe to substitute Russian gas.”

Key developments to watch out for

Beyond US shale, where strong activity is leading to very strong cost inflation, Goldman’s is looking to a revival of new LNG projects in the US, Africa and Papua New Guinea.

The broker also sees a recovery of deep-water oil investments, mostly focused on Brazil, Guyana, the Gulf of Mexico and West Africa.