Despite everything the market has been through recently, the Australian share market remains less than 2% away from its all-time record high of 7,632.8 points which it reached mid-August last year.

Without putting too fine a point on it, much of this gain can be attributed to the materials, energy and the financials space.

On the flipside, fears around rising interest rates have hit certain sectors hard, these include the tech space, where investors are less willing to pay a premium for future growth as interest rates rise, and that’s even more acute given the number of start-ups in this sector.

With interest rates rising, what investors now want is stocks with a strong track record of stable cash flow.

The consumer discretionary space is also expected to witness a turnaround in its fortunes with consumers expetected to have less to spend once savings have dried up.

Assuming investor expectations around inflation and interest rates continue during April, some quality companies with stable cash flows, previously overlooked by the market, may come into view.

Does Ingenia Communities deserve to be on radar?

One such stock which at face appears to have been off-radar for some time is the tourist park and seniors living company, Ingenia Communities (ASX: INA).

Despite slashing guidance based on market challenges, the company’s share price was 2.46% higher in early afternoon trade.

The company now expects FY22 settlements to be in the range of 400 to 425, compared to its previously flagged target of more than 475 settlements.

Management also advised investors that delays have been exacerbated by the flow-on impact of recent unprecedented rainfall.

To the uninitiated, Ingenia is a leading Australian property group that owns, operates and develops a growing portfolio of lifestyle and holiday communities across key urban and coastal markets.

Financials are in good shape

Despite the share price bouncing -27% lower since early January, the company’s key financials, notably its return on equity (ROE) and free cash flow (FCF) are encouraging.

The company is no stranger to growth-by-acquisition having completed nineteen of the twenty acquisitions outlined in the Acquisitions and Equity Raising announcement on 1 November.

Around $522m in recent acquisitions is being funded by a $475m equity raising along with debt.

Despite additional delays created by recent weather events, which have increased uncertainty in the company’s supply chain, CEO of Ingenia Simon Owen today reminded the market that overall demand for the company’s lifestyle communities under development has never been stronger.

Owen notes that revenue up 45% on prior year (year to date) and bookings through to June 2022 remain strong.

“Our Holidays business is experiencing buoyant conditions with the removal of covid restrictions and the return of interstate travel driving additional demand,” said Owen.

“The business remains in a strong position with growth in the asset base and accelerating development supporting returns into FY23.” 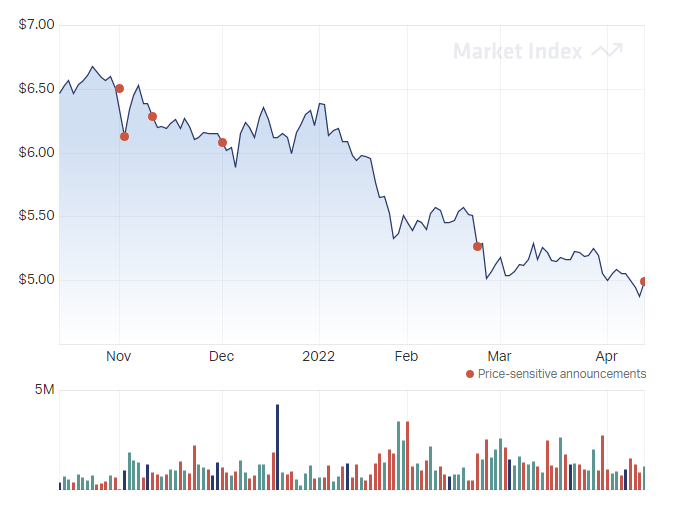 Ingenia's share price has struggled over the past six months.

Despite sitting just outside the ASX200 (market cap $2bn), coverage of this real estate stock is remarkably light.

Based on the four brokers that cover the stock, the consensus is Moderate buy.

UBS expects recent transactions to increase the asset base by 38% and broadly maintains the business mix.

While UBS has not updated since November last year, the broker maintained a Neutral rating and expects high single-digit accretion from recent acquisitions. Target rises to $6.75 from $6.60.

Based on Morningstar’s fair value of $5.43, the stock appears to be undervalued.