Despite recovering from the worst of covid at first-half FY22, when revenue jumped 32% to $20.2m and earnings (EBITDA) increased 11% to $2m, short-term hurdles continue to prevent Audinate (ASX: AD8) from firing on all cylinders.

In addition to the current component shortages, and restrictions on live events, the audio and networking company is also having to contend with changes to interest rates, which are by no means a friend to IT-based growth stocks.

After being caught up in the hate-fest dished out to the tech sector at large (down -17.22% year to date) earlier this year, the company’s share price is now down around a third since trading as a high as $10.30 early December 2021.

But despite the lingering issues around interest rates, there’s mounting evidence to suggest the stock has been left looking significantly oversold. Based on the two brokers covering Audinate (As reported on by FN Arena) the stock is currently trading with 50.9% upside to the current price.

Even based on its most bearish scenario, fund manager Intelligent Investor – a long-term advocate of the Audinate – reached a valuation of $10 for the stock last year, with more bullish assessments valuing the company at over $20.

It’s important to note that at the company-specific level, nothing has happened to change the fund manager’s positive fundamental outlook on the stock.

To the uninitiated, Audinate provides the what’s called the Dante offering to the audio sector.

While Audinate has been witnessing unprecedented demand, component shortages – notably chips - are currently staunching the speed at which the company can grow.

To help make that digital transition as painless as possible, management is planning to launch new Dante video software and cloud services products.

In light of component shortages, the size of the addressable market may be cold comfort for the market right now. But management has reassured investors that pent-up demand will still be there once supply chain issues return to normal.

Adding to the company’s video offering was the recent purchase of Silex Insight in Belgium which has particular expertise in video compression, a key ingredient in video networking.

Management has also flagged that the company’s balance sheet is well positioned to capitalise on future strategic acquisitions. 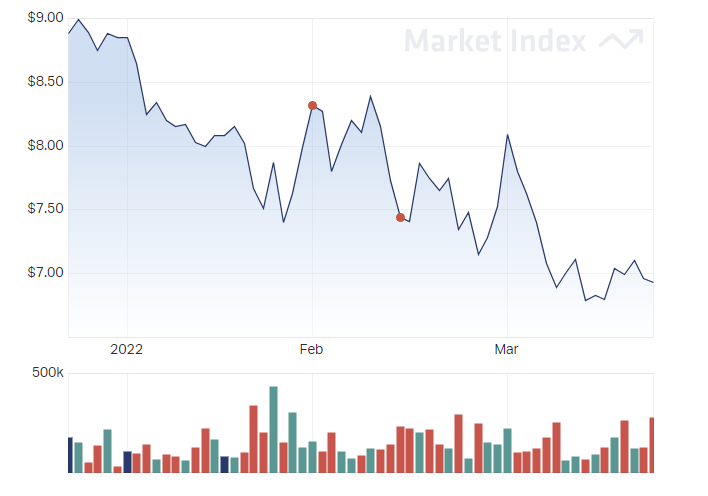 Audinate has bounced lower over the last three months.

UBS notes that chip shortages have seen the Brooklyn-III launch delayed to the first half of FY23.

Despite supply chain constraints, the broker expects Audinate to further strengthen long-term opportunities, with product releases opening new revenue streams, and maintains a Buy rating, with the target price decreasing to $10.30 from $10.75. (15/02/22).

Despite second half risks from low supply visibility, Morgan Stanley is also a believer in Audinate's long-term growth story, and regardless of forecast second half cash burn, the broker sees an ample cash runway.