Due to strong currencies in resource-rich countries plus increased royalties and raw materials expenses – namely fuel costs - South32 (ASX: S32) has advised the market that production costs will be higher-than-expected at several of its mines.

To the initiated,  South32 is a diversified metals and mining company operating in Australia, Southern Africa, North America, and South America.

The market took greater note of the bad news within this morning’s mixed-bag announcement, with the share price down -6.82% 30 minutes out from the open.

Today’s March quarter update revealed that output had lifted across a number of key assets in the first nine months of the financial year, these include:

Overall, South32 expects rising costs across its operations, plus a weaker US$, to increase costs between 3% to 15% compared to its previous guidance.

Management notes higher received prices are also flowing through to royalties paid to the governments of the countries in which South32 operates.

Echoing the sentiments experienced by many of its contemporaries, South32 noted that supply chain issues and tight freight markets, were forcing the company to explore new ways to ensure delivery of its products to customers. 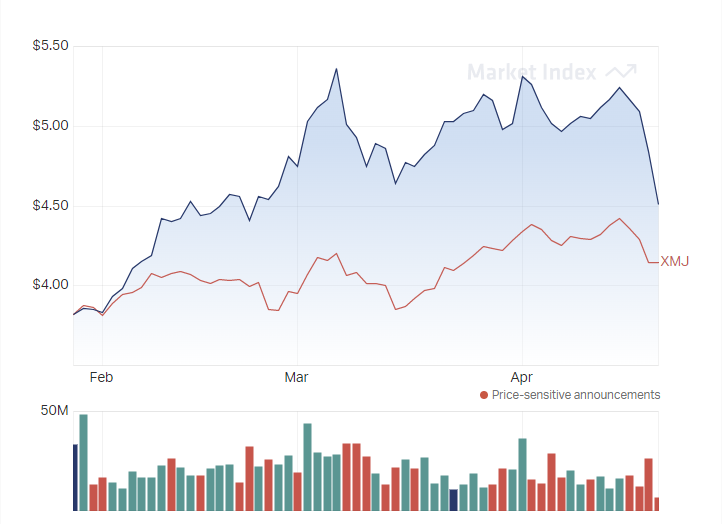 Based on the brokers that cover South32 (As reported in by FN Arena), the stock is trading with 24.1% upside to the target price of $6.00.

Goldman Sachs likes South32’s free cash flow (FCF), mostly due to its base metal exposure (Buy) and has a target price of $5.80.

The broker also notes higher prices for base metals and coal from supply disruptions from the Russia/Ukraine conflict.

Macquarie expects elevated spot pricing on coking coal, alumina and nickel to support earnings upgrades for South32 in the coming year and retains an Outperform rating and target price of $7.00.

Based on Morningstar’s value of $5.04, the stock appears to be fairly valued.