Sayona Mining (ASX: SYA) entered into a trading halt this morning before the lithium explorer announced plans to raise $190m for its Canadian projects.

The offer was priced at 18¢ a share which represents a 12.2% discount to the ten-day volume weighted average price, and a whopping 35.7% discount to where the Sayona share price finished at the close on Friday.

Canaccord Genuity and Petra Capital were the joint lead managers and bids were due 5pm Wednesday.

Sayona Mining had $20m cash, no debt at March end, and prior to capital raise had a market cap $1.47bn putting it well within the S&P/ASX 300.

It’s understood funds raised will be used to support:

All these activities are located in the Quebec region of Canada where Sayona plans to build a lithium hub.

Today’s announcement follows the recent release of a disappointing pre‐feasibility study (PFS) for the 75%-owned NAL, from which it expects 168,000 tonnes average annual production of 6% spodumene concentrate over a 27-year mine life.

The study estimates capital cost for restarting the mine and concentrator at around $100m.

Overall, the PFS revealed that net present value of the project was well short of market expectations, which may have contributed to the miner's stock tumbling 25% in value to $0.21.

With the company now in trading halt, the share price can’t fall any further. However, what happens on Friday 27 May when the company resumes trading remains to be seen.

It’s understood that project economics are based on proved and probable ore reserves (JORC compliant) of 29.2m tonnes averaging 0.96% lithium oxide, plus an upgraded ore reserve.

Commenting on recent developments, managing director Brett Lynch reminded investors that the acquisition of NAL and turnaround plan was less about restarting the existing operation and centred on:

“We have been modest with our pricing assumptions, but… there is potential for significant upside in the NPV projection given recent trends in spodumene prices,” Lynch said.

“Accordingly, the project partners have already pre‐ordered long-lead equipment items in anticipation of a positive study result, ensuring we are ready for start‐up in Q1 2023,” he added. 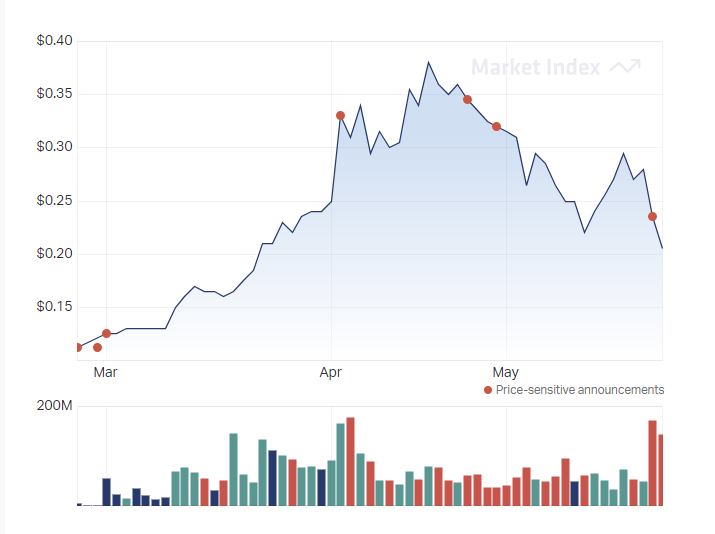