In the June quarter Australia’s CPI rose 1.5% to 6.1%, compared with the previous year - following a 5.1% increase in the first quarter – and slightly below the market consensus of 6.3% through the year.

On a quarterly basis consumer prices were up 1.8% against a forecasted rise 1.9%, following a gain of 2.1% in the March quarter.

Today’s revelation that inflation had risen to 6.1% is expected to set the tone for the next Reserve Bank (RBA) rate hike in August.

Driving the rise in the June quarter CPI were new dwelling prices which rose 20.3% following the withdrawal of government support, while petrol prices soared 32%.

The ABS notes, fewer grant payments made in the quarter from the government's HomeBuilder program, plus similar state-based housing construction programs also contributed to the rise.

Non-discretionary inflation, including expenses such as food, petrol, housing and health costs, was up 7.8% in the year, while fruit and vegetables prices rose 5.8%.

In response to today’s inflation numbers the A$ fell to US69.37¢ from US69.52¢ while government bond yields pulled back.

Twice the speed of wages

Commenting in parliament ahead of today’s CPI data, treasurer Jim Chalmers highlighted inflation growth which is now twice the rate of wages in the coming year.

Today’s inflation numbers also coincide with a decision by the International Monetary Fund (IMF) overnight to downgrade its outlook for the global economy for the second time in three months.

The IMF is now forecasting growth of 3.2% this year and 2.9% next year, 0.4 and 0.7 percentage points lower from April’s forecast. 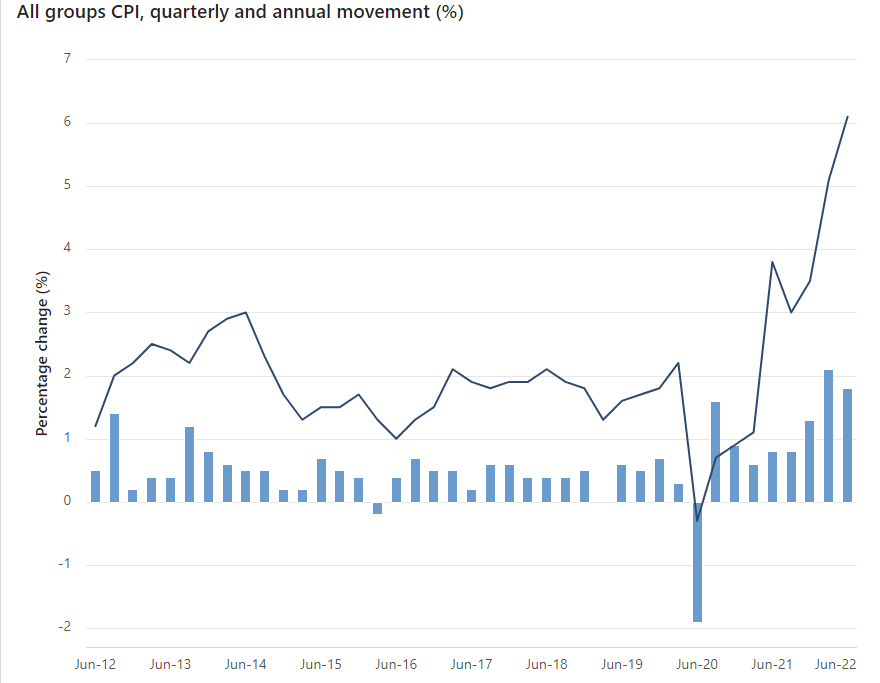