Is it time to bury EML's overhang and refocus on future upside?

While all stocks will benefit from market signals that the recent down-trend in share price movement – courtesy of war in Ukraine – has finally bottomed, some stocks directly wired to impending cash rate rises could be among the first to regain lost ground.

One of these stocks is embattled international payment conglomerate EML Payments (ASX: EML) which is currently trading at around half its early-May 2021 share price.

Since 10 February the share price has plunged from $3.32 to $2.25, which for the most part has more to do with the broader market selloff than anything new.

What’s weighing on the stock

After the overhang experienced by the company in relation an investigation by the Central Bank of Ireland (CBI), the market was clearly in no mood to hear anymore bad news.

Nevertheless, the share price continued to lose ground following the mid-February decision by management to recognise a $10.5m provision for legal fees to vigorously defend a class action lawsuit relating to disclosures about its regulatory troubles in Ireland.

While the CBI has not identified any actual instances of financial crime, or AML or counter-terrorism financing events, running through EML systems, it’s evident that some overhang remains.

Despite all the noise around CBI’s investigation, and the near-term macro/geopolitical backdrop, investors can take some solace in the amount of money flowing through EML’s payment platform, which was up 209% in the six months to December, to a record high of $31.6bn.

While acquisitions were one key driver, transactions in the company’s General Purpose Reloadable segment were also up 29%.

Other noteworthy highlights include:

Following the announced plans to defend a class action lawsuit, EML CEO Tom Cregan reassured the market the company will ultimately be a stronger business with more resources to support future growth objectives.

However, management is also guiding to underlying net profit (NPAT) between $27m to $34m, a decline of 17% at the low end and 5% growth at the high end.

While EML is only expected to generate between $58m-$65m of earnings in the year ahead, investors should note that the company is well placed to benefit from any pending uptick in interest rates.

For example, by management’s own admission, every 1% increase in interest rates adds around 25% to operating profits, and most of that would find its way directly to the bottom line. 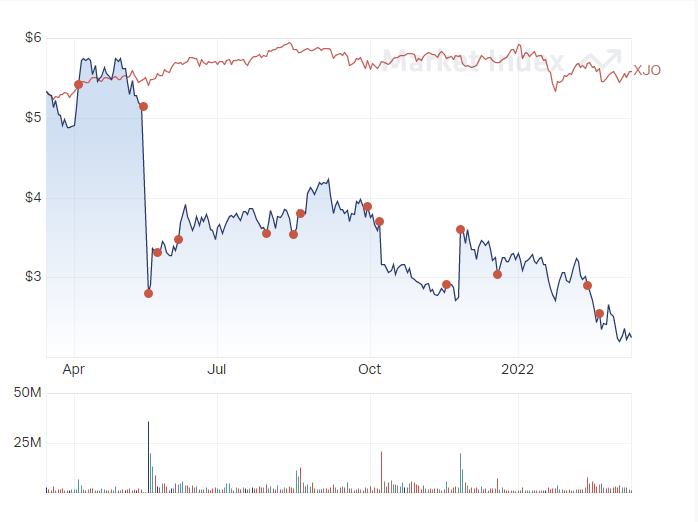 Every picture tells a story: The overhang on EML share price has been evident over the last 12 months.

Based on the brokers that cover the stock (as reported on by FN Arena), EML is trading at an 81.0% upside to the target price of $4.12.

Macquarie believes EML is likely to be entering an earnings upgrade cycle following 12 months of earnings downgrades, and retains an Outperform rating, with the target trimmed to $3.80 from $3.90. (17/02/22).

While the CBI regulatory issue did drive underlying overheads up 24%, UBS believes the market has been overly fixated on the negatives and retains a Buy rating, with the target price increasing to $4.55 from $4.40. (17/02/22).

Ord Minnett has a positive outlook for FY23 with lower costs, higher interest rates, a covid recovery and strong growth in open banking and GPR collectively flowing through to earnings. The broker maintains a Buy rating, with the target price nudging higher to $4.03 from $4.02. (17/02/22).