Incitec Pivot (ASX: IPL) was up 1.63% an hour in from the open after disclosing that the US plant has resumed production following the mid-February rupture to section of pipe which resulted in a release of hydrogen.

The fertiliser and explosives chemicals giant plans to take a $US128m ($173m) hit to its interim earnings (EBIT) and a $US92m ($124m) impact to its profit following ongoing issues at its troubled Waggaman ammonia plant in the US.

This is not the first time the company has had to cut earnings due to failure of key equipment at Waggaman and other operational issues.

It is understood the US facility is now operating at nameplate capacity.

Management advised investors that around 75% of the impact on earnings will be in the first half FY22 financial results due out May 23.

Management also notes the company is continuing to work with its insurers to progress a claim under the company's comprehensive property insurance policy.

Meantime, the company’s first half financial results is not expected to include any adjustments for potential insurance recoveries.

“I would like to recognise the efforts of our dedicated workforce on the ground at the Waggaman plant for returning the plant to full production.”

“Our ability to make the necessary repairs as quickly and safely as possible would not have been possible without all the support we received from our engineering, design, and construction partners who provided the appropriate materials, labour, and expertise.”

The company’s share price has surged from $3.05 late February following a Credit Suisse upgrade to Outperform on the back of higher fertiliser prices.

The company is also expected to benefit from plans to acquire 100% of French explosives manufacturer Explinvest which is expected to be completed by June 2022.

Based on the brokers that cover Incitec (as reported by FNA Arena), the stock is currently trading with -1.6% downside to the target price of $4.02.

Consensus on Incitec is Strong Buy.

Based on Morningstar’s fair value of $3.61, the stock appears to be overvalued. 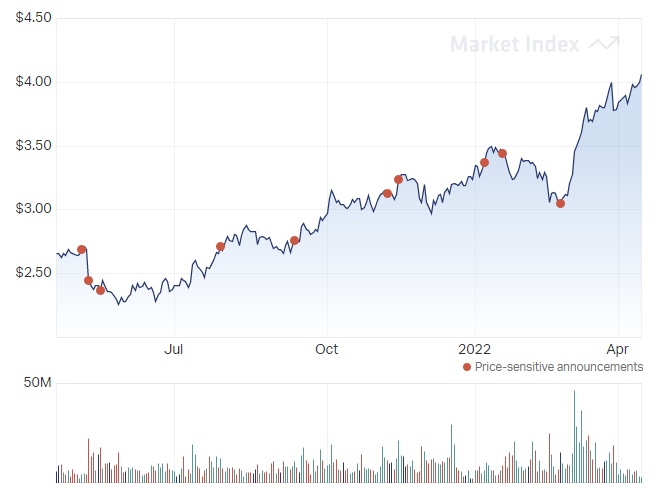