Iluka Resources (ASX: ILU) was trading up 7.29% to a record high at the open after the mineral sands company revealed that a final financial investment decision (FID) has been made to proceed with construction of its rare earths refinery located at Eneabba in WA.

Today’s decision follows completion of two notable milestones, including the feasibility study, demonstrating solid economics and significant potential for growth; and an agreement of a risk sharing arrangement with the Australian government.

With the aid of a $1bn low-cost loan from the federal government, plus $200m in company cash, Iluka will construct a $1.2bn fully integrated refinery for the production of separated rare earth oxides at Eneabba, aka Phase 3.

Phase 3 is expected to process rare earth feedstocks sourced from both Iluka’s portfolio and from a range of potential third-party concentrate suppliers, with first production due in 2025.

Iluka plans to establish a separate subsidiary to build and manage the refinery, with the government loan operating as a non-recourse to its own balance sheet.

“For several years, Iluka has been progressing its diversification into rare earths based on the company’s assets at Eneabba in WA and Wimmera in Western Victoria,” O’Leary noted.

“Since 2019 we have adapted, accelerated and amplified these plans in the context of key external developments, notably the continued transition towards the electrification of the global economy and the increasing policy priority assigned to critical minerals and their supply chains by the Australian Government.” 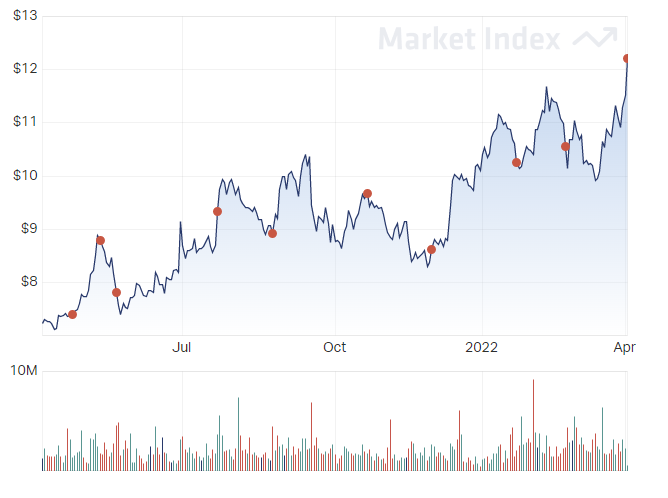 Based on the brokers covering Iluka (as reported on by FN Arena) the stock is currently trading with a -9.6% downside to the target price of $10.41.

While consensus on Iluka is Moderate Buy, today’s announcement may see brokers revise their target price forecasts, so watch out for updates later this week.

At the lower end, Credit Suisse’s recently lowered its target price to $9.00 from $9.50 after downgrading the stock late February to Underperform from Neutral.

Based on Morningstar’s fair value of $10.07, the stock as at 2 April looked overvalued.