How Aussie investors can play the ‘India growth story’

Over the 10 years to 2018, India’s economy had average annual growth of 7.5%, and the IMF expects it to expand by 9% in 2022, and 7.1% in FY23, as trading rebounds from covid disruptions last year. But global factors currently weigh heavily on the country’s stock market.

Interest rate rises in the US and elsewhere could place pressure on Indian stocks as international investors pull money out, while an interest rate increase by the Reserve Bank of India could dampen domestic lending and growth.

The country imports around 82% of its oil consumption, leaving its economy vulnerable to crude prices that are hitting historical highs after Russia’s February 24 invasion of Ukraine.

The global Brent oil benchmark currently trades at US$128 per barrel - its highest level since 2008. India’s market has felt the pain - the Sensex is down 7.2% since the start of the invasion - as investors factor in higher energy and input costs.

In a February briefing to his investors, Hoh said the covid situation in the country was rapidly improving, with daily cases reported falling to 60,000, from a peak of 300,000 in early January.

The outlook for the Indian economy looks “robust”, with growth underpinned by a 24% year-on-year increase in capital spending for FY23, and projected strong growth in exports and manufacturing.

“This backdrop creates an attractive environment for investors scouting companies with high earnings growth,” he noted.

Net of taxes and fees, his fund returned 0.3% for January, and 26% for the year to January.

Ellerston Capital isn’t the only way for Australian investors to gain exposure to Indian growth. The Betashares India ETF (ASX:IIND), with $66m in assets under management, has fallen circa -14% since the start of the year, in line with the Indian index it tracks.

Other non-ASX options for investors are the Fidelity India Managed Fund, with $237m assets under management, which has returned 20% in the year to February;  and the $100m Fiducian India Fund, which has not yet published its February performance.

Both options are relatively high on fees - Fidelity charges 1.2% management fee, and Fiducian 1.82%, compared to less than 1% for the ETF funds. 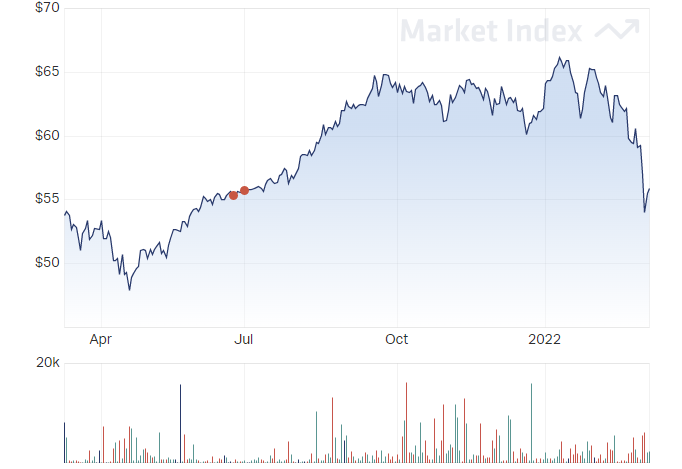 A handful ASX-listed companies have Indian operations that provide investors with indirect exposure to the country.

One of the best picks is property advertising leader REA Group Ltd (ASX: REA), which in 2020 increased its ownership of Indian real estate advertising company Elara Technologies, owner of the key www.housing.com domain.

The business was rebranded REA India last year and contributed $24m in revenue to REA’s first half FY22 result, an increase of 125% on the first half FY21 contribution.

Other companies included Zip Co Ltd, (ASX:Z1P), which entered the Indian market last year with the $70m purchase of a minority stake in fintech firm Zestmoney.

The Bengaluru-based buy-now-pay-later (BNPL) company has 11m registered users and a strong presence in online Indian merchants, as well as a presence in 75,000 physical stores.

Zip Co believes India “has the potential to become one of the largest markets globally and by FY26 is forecast to have US$300bn” in BNPL volume.

Is a ‘one-click’ gearing strategy into shares right for you?