Shares in Graincorp Ltd (ASX: GNC) have been on a tear since November, as Australia prepares to export one of the biggest ever grain harvests.

The stock surged from late last year, as news of the bumper crop circulated, but then rocketed a further 10% with the onset of war in Ukraine, which threatened to disrupt grain exports from two of the world’s biggest suppliers.

With international wheat prices moving about 40% higher since February 24  - compared with just an 8% increase for domestic prices - Australian grain traders have been in a frenzy seeking export channels out of the country.

But ports are now at full capacity, with Graincorp figures published this week showing that the company had just 32,000 t of elevator capacity open for April.

Just two of its seven ports have any spare capacity remaining for the rest of the season.

The figures also showed the company had 89,000 t of grain sitting at three ports waiting for export.

These bottlenecks suggest that, despite the share price rise since February 24, Graincorp has limited upside from the international situation.

Dennis Voznesensky, an agriculture analyst with Rabobank, said on Thursday that the grain export restraints on companies like Graincorp would likely last at least until mid-year.

He also said the Ukrainian war had also affected the barley market - Ukraine was the third-biggest exporter last year.

Barley has similarly increased in price, putting special pressure on grain traders in China, which have avoided buying Australian barley due to anti-dumping trade measures levied by Beijing.

Grain traders are now suggesting the Chinese might begin to buy Australian barley, despite the anti-dumping measures.

With Ukraine and Russia cut off from the market, Chinese buyers have access to about 40% of the export market.

“There’s no guarantee that China will come back for Australian barley, but the amount of sourcing options around the world has become slightly limited,” Voznesensky said. 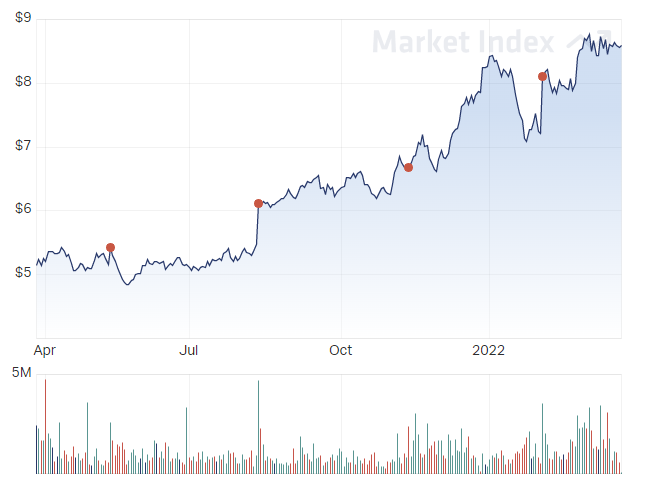 Graincorp's share price has moved consistently higher over the past 12 months.

Based on the brokers covering Graincorp (as reported on by FN Arena), the stock is currently trading with -3.6% downside to the current price.

Morgans last month cut its rating of the stock to Hold, from Buy, citing wariness over the “near-perfect” trading conditions at the grain company. The target price increased to $8.06 from $7.90. (08/02/22).

While the company's valuation appears cheap, UBS suspects the period most likely represents peak-cycle earnings, and retains a Neutral rating, with the target price climbing 4% to $8.30. (08/02/22).