It all contributed to the group’s earnings miss in FY21, when net earnings  per share were about 2 cents/share lower than consensus estimates.

But just as the horizon starts to clear, difficulties in the global grains trade could threaten the company’s cost base again.

Shares in United Malt have fallen -10% since February 24 and are down about -15% since the start of the year, as concerns over the price of key input barley weigh on investors.

Global barley prices, which were already increasing over the past six months due to drought in North America and lower plantings in Russia, have shot up since February 24, when Russia began its invasion of Ukraine.

Ukraine and Russia are the third and fourth-biggest barley exporters, respectively, based on data from Statistica, with Ukraine selling circa 6m t on the international market in 2021.

With that supply now threatened, the rough grain market has reacted accordingly, with the International Grains Council’s Barley Index rising nearly 30% since the start of the invasion.

While Australia has experienced a record barley crop recently, the global situation could weigh down on United Malt, which spent in FY21 nearly $1bn on raw materials and consumables, including barley.

The company did not provide a breakout of the costs, but it is believed most of this raw materials cost - which dwarfed all of its other costs -  would be barley.

It was unclear whether energy and water costs also formed a part of the spend on raw materials.

But based on rough calculations by Market Index, and assuming only half of the raw materials cost is barley,  even a 10% increase in barley prices could demolish the maltster’s narrow net profit after tax (NPAT) in FY21 of $13.8m, sending the group into the red.

However, the impact of the higher barley costs is dependent on the company’s ability to pass on the costs to its customers. 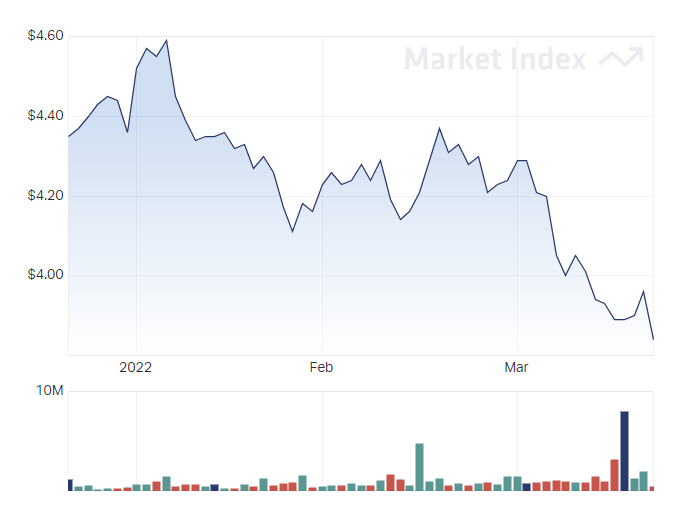 UBS: The broker thinks lower malt sales volumes are temporary and is encouraged by management’s transformation programs that will generate as much as $30m in benefits. The broker maintained its Buy rating, with a lower target price of $5.05.

Macquarie: Estimates that the outlook for the FY22 is positive, assuming no further covid restrictions are put in place in key markets. Macquarie retained its Outperform rating, with a target price of $4.55.

Morgans: The broker isn’t convinced that a full recovery in FY22 is possible for United Malt, given Asia is still lagging, as well as continued supply chain constraints. It retained its Add rating, with a target price of $4.97.