Revelation that the company beat its iron ore export guidance to ship 189m tonnes to the end of June 30 – after a record 49.5m tonne June quarter – saw the share price up 2.20% at the open.

After factoring in a million tonnes from its delayed Iron Bridge magnetite project, output expectations for the current financial year have been lifted to between 187m and 192m tonnes of ore.

Overall, Fortescue ended June with net debt of US$900m, down from US$2.4bn at the end of March, and with US$5.2bn in cash at bank.

However, on a less positive note, the miner nudged cost expectations higher courtesy of continued cost inflation currently being experienced within the Australian mining industry.

As a result, the miner now expects the average cash costs of US$18 to US$18.75 a tonne for its direct shipping ore in the current financial year, up from an average $US15.19 a tonne last financial year, and above the $US17.19 a tonne cost of the June quarter.

Fortescue attributes revised guidance to the lag effect of ongoing inflationary pressures, and cited diesel, labour rates, ammonium nitrate and other consumables together with mine plan driven cost escalation.

The company expects costs for its green energy focused unit Fortescue Future Industries to come in at between US$600m and US$700m in the 2023 financial year. 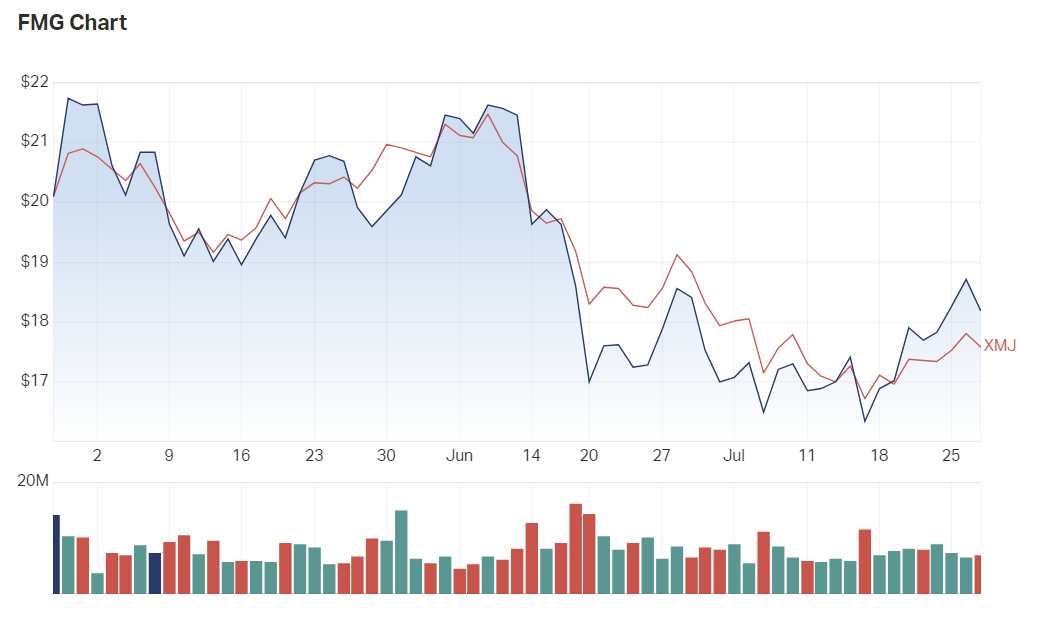 As a reflection of underlying uncertainty surrounding the iron ore price, rising costs and labour issues, Fortescue’s share price is down around -30% over one year.

Consensus on Fortescue is Moderate Sell.

Based on Morningstar’s fair value of $17.50 the stock appears to be overvalued.

Based on the seven brokers that cover Fortescue (as reported on by FN Arena) the stock is currently trading with -8% downside to the target price of $16.72.

In light of rising cost pressures and lower expectations for base metals, Goldman Sachs has a Sell rating and price target of $13.20.

Based on the tight WA labour market and inflationary environment, UBS sees risks to both timeline and capex for Fortescue’s Iron Bridge magnetite project and maintains a Neutral rating and $16.00 target price.

While Credit Suisse remains positive on iron ore, coal and aluminium, the broker is concerned about rising costs and retains a Neutral rating, while the target price drops to $17 from $20.