Despite looming US inflation read, signs of hope are emerging in global supply chains

Last month, Market Index News highlighted a note from Bloomberg underscoring indications that consumer prices may soften in the coming weeks and months. Broken down:

Since the time that research was written, EU and US gas benchmarks have risen once again, which makes it harder to say fertiliser (and crop) prices will continue to downward trends.

(Much ammonium made for fertiliser is ultimately made from gas.) That brings us to the energy problem.

With regards to softening oil prices, Goldman Sachs claims the price of oil could once again hit $140/bbl, and there is great uncertainty for energy markets wholemeal as the Northern hemisphere enters the 2022 winter, as iterated by the IEA this week.

And don’t forget ongoing lockdowns in China have added to gloom prompted by US inflation reads, and the emerging likelihood we will enter a recession.

Last week, the IMF announced a global recession through 2023 was now more likely, too.

Worth noting is that these three factors (lockdowns, inflation, recession) are stifling demand, which is driving down prices, as opposed to the resolution of systemic issues that trigger during snapback surges of high demand.

These changes could all revert upward without much warning, should China ditch its covid zero policies. 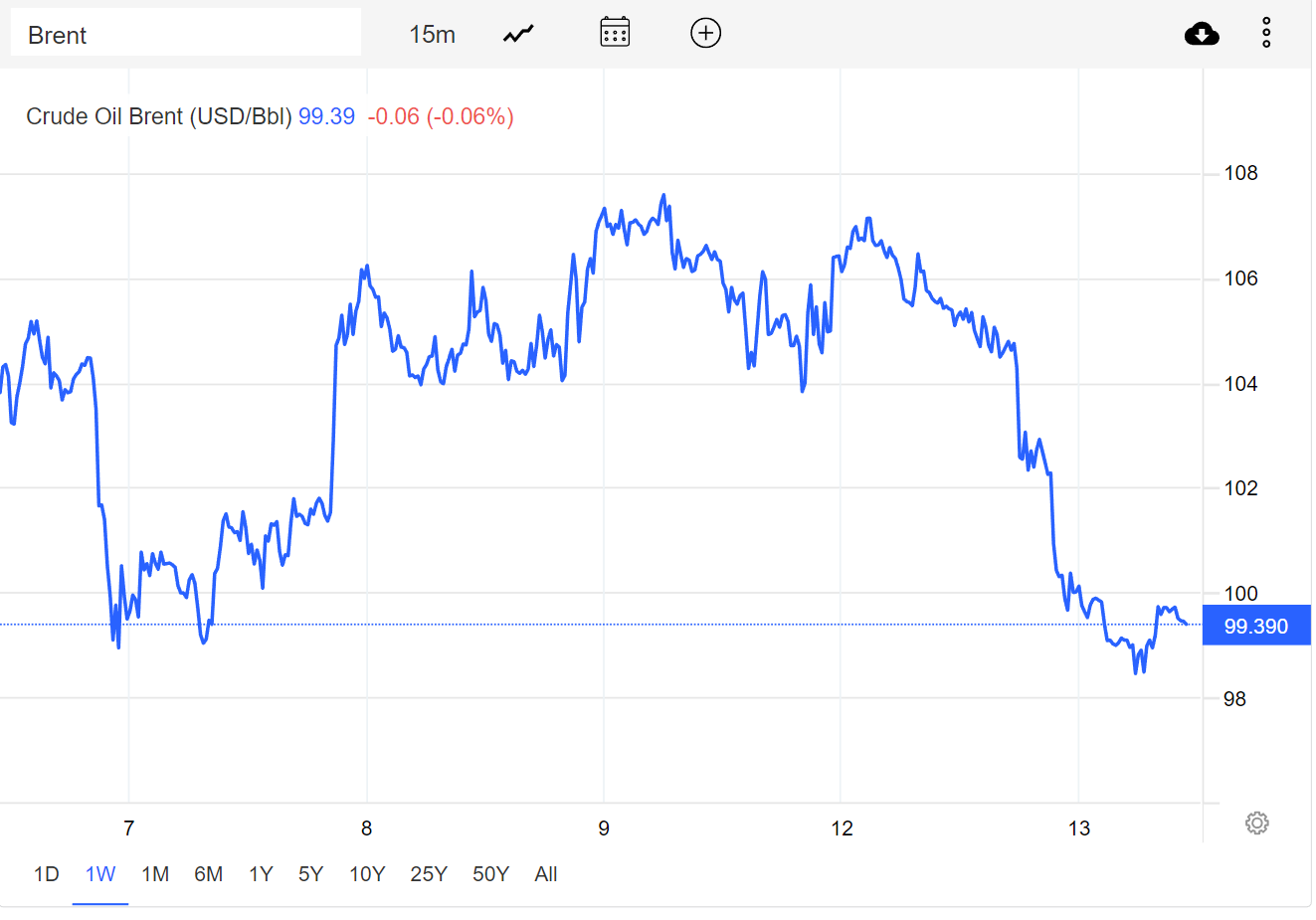 Brent prices in mid-afternoon trade, once again below $100bbl (TradingEconomics)

Taiwan’s TSMC, the largest provider of microchips to Apple and a major contributor to Samsung (and automakers), has currently posted a 44% soar in sales, ultimately meaning the firm has more chips to sell.

While Apple is TSMC’s biggest customer, Samsung also posted a 21% jump in revenues, suggesting it has more products coming off the line to sell.

Output from the automaker industry remains subdued on pre-covid levels, but also shows signs of recovery.

ASX microchip stocks are R&D heavy and do not manufacture at this current time, so there is little obvious implication for any singular Australian equity. Though, recent enthusiasm for the tech sector may be a sign of recovering sentiment.

For an overview of ASX microchip stocks, check out Market Index’s wrapup here.

Freight and shipping rates are starting to fall on wavering demand

While freight and shipping costs remain far above pre-covid levels, there is still a general decline in the cost of shipping and trucking worldwide.

This relates to everything from shipments of medicines to mining ore to new cars to retail goods to infrastructure components to base commodities and whatever else.

The Wall Street Journal reports companies are renegotiating shipping agreements made in the middle of covid where prices were higher.

San Francisco firm Jettison noted a number of its shippers are ditching contract rates for the spot market, which is now cheaper than the costs of those contracts.

The overall news has good implications for inflation wholemeal, given that the cost of shipping and freighting was itself a major driver behind inflation in the first place.

At the start of 2022, record-high contract rates for shippers were the defining characteristic of the market.

I cannot name names, but I am aware of at least one mining company in South Africa currently unable to ship its ore into world markets, given that they simply can’t afford the cost of a ship at $80/ton. 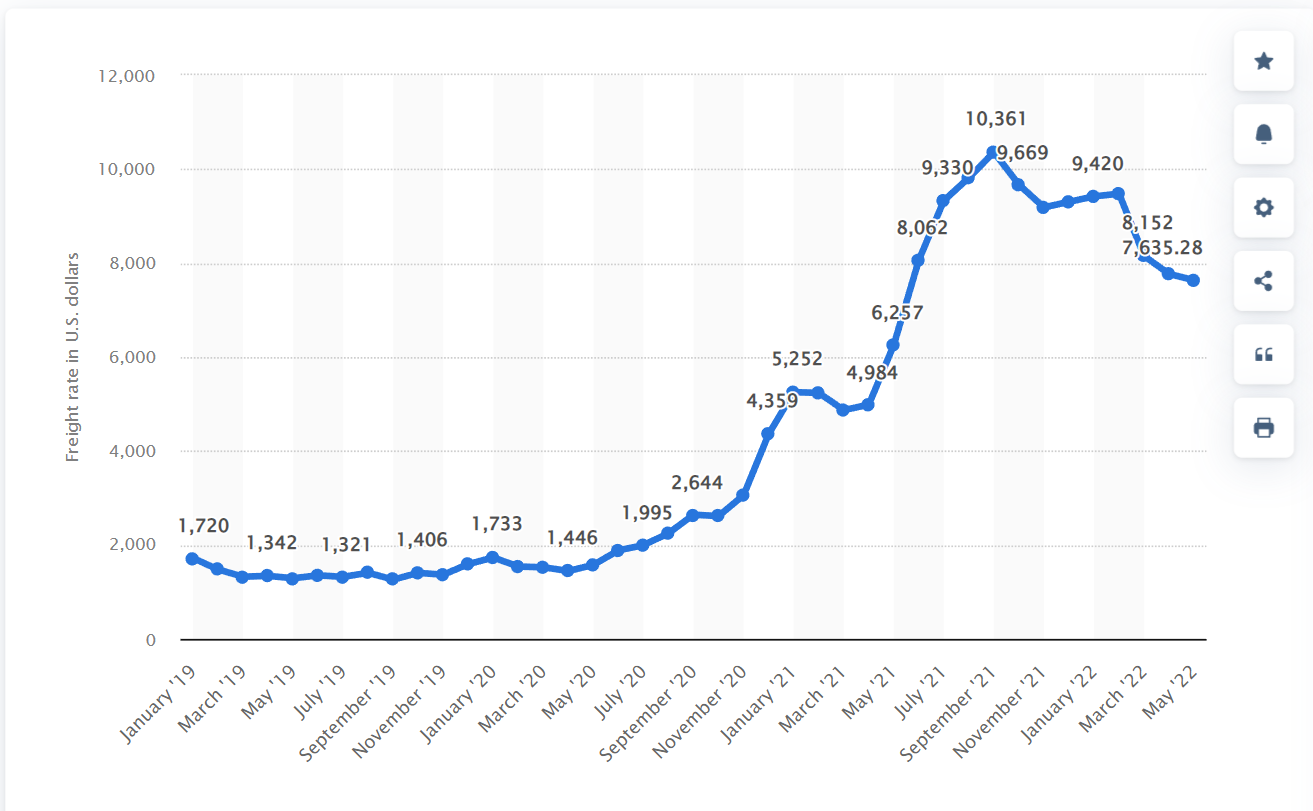 While all of this is well and good, the harsh reality of our current environment is that things just weren’t as good as they were two years ago, and we’re really just going to have to cope with that.

If the US inflation read released tonight is above expectations, while most participants are better placed this time to brace that, it could lead to another mass sell-off event.

Of course, if it comes in under 8.6%, demand could pick back up, pushing prices of shipping back up, and maybe even putting pressure on microchips again.

There is also the risk that China might get fed up with lockdowns and go full USA on the issue, which would also likely see a massive snapback in demand, which might see Goldman Sachs’ $140/bbl prediction come true.

Time will tell, but, for now: there are signs of hope that one day, things will go back to normal. Not a “new normal” - the real normal.