Things are getting ugly for cryptocurrencies as investors kick off 2022 by exiting high risk assets.

The total market cap of crypos has fallen by more than a third since November 2021.

Headlining the losses, in terms of percentage from 2021 highs, include:

A new era for interest rates

Much of crypto’s meteoric rise has been during an era of ultra-low interest rates, leading to an abundance of cheap cash.

Cryptos staged a sharp decline in the new year following the release of the Federal Reserve’s (The Fed) December meeting minutes. The Fed hinted at more interest rate hikes and plans to reel in its massive US$8.9tn balance sheet.

With the era of low interest rates coming to an end, this could shift the opportunity cost for investors betting on risky assets like cryptos and in turn, bring funds back into risk-free assets like bonds.

Kosovo, a state in Southeast Europe has targeted the crypto mining industry to keep energy consumption at bay amid its worst energy crisis in a decade.

The civil unrest taking place in Kazakhstan weighed on the hashrate of major Bitcoin mining pools as the country’s internet went dark last week. According to Coindesk, Kazakhstan is the world’s second-largest bitcoin miner.

Mining hashrate is a metric used to show the computing power in a network.

Bitcoin's road to glory has not been without its setbacks.

Charlie Bilello, founder and CEO of Compound Capital Advisors has put together Bitcoin's recent corrections including how long it took to return to new highs.

The fear and greed index is sourced from emotions and sentiments from different sources, crunched into one simple number. 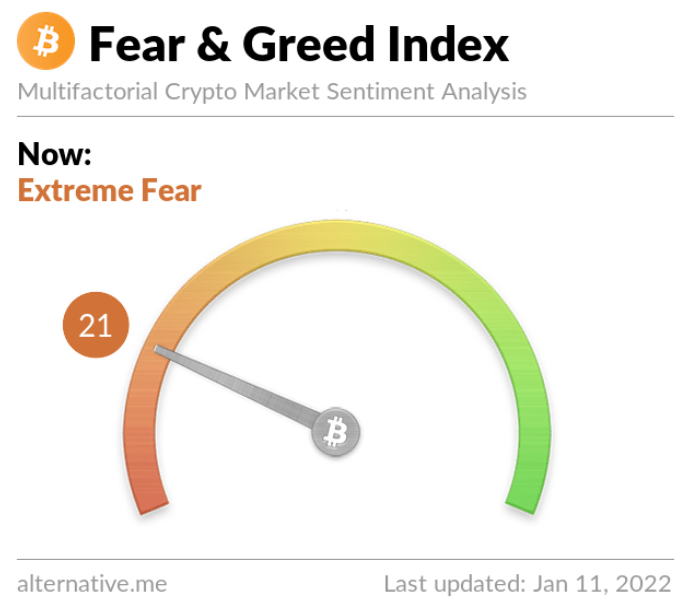 At the same time, risk assets are backed up against the prospect of rising interest rates. Perhaps now is not the time to try and be the hero.