In a development that could impact Australia’s almond industry, California, where about 80% of the global supply of the water-intensive nut crop is grown, is on track to see its driest ever start to the year.

The state recorded its driest January and February on record, and March is set to be similarly rainless, prompting calls by some commentators for authorities to impose strict water use mandates on urban and agricultural consumers.

If confirmed, a Californian drought would be good news for Australian producers like Select Harvests Ltd (ASX: SHV), whose shares slid -18% YTD on logistical problems and a persistently low almond price driven by record American output.

The company’s stock rallied in August and September last year, amid predictions the US drought would hit almond production.

But it has since given back all those gains, after heavy rainfall in late 2021 [in California] dashed those Australian hopes. This year’s American harvest is expected to be only slightly less than last year’s bumper 3.2bn pound crop.

Select Harvest also funded most of its $138.3m acquisition of the Piangil Orchard by issuing new stock, which also pressured the stock price.

Higher nut volumes drove revenue up 22% compared with FY20, but earnings (EBITDA) fell 15% on the prior period, to $53.7m, on lower realised almond prices.

Chairman Paul Thompson said the financial result showed the company could remain profitable even at the lowest point in the almond price cycle.

The biggest factor on future price is output in California.

A drought would impact almond yields, as would government-imposed water restrictions.

Water, which accounts for a significant share of costs for American orchards, is also becoming more expensive.

The price benchmark of the private water market in California, the Nasdaq Veles California Water Index, was at US$793 per foot acre on Tuesday - down slightly from its peak last year, but much higher than the US$215 per foot acre seen in early March 2020. 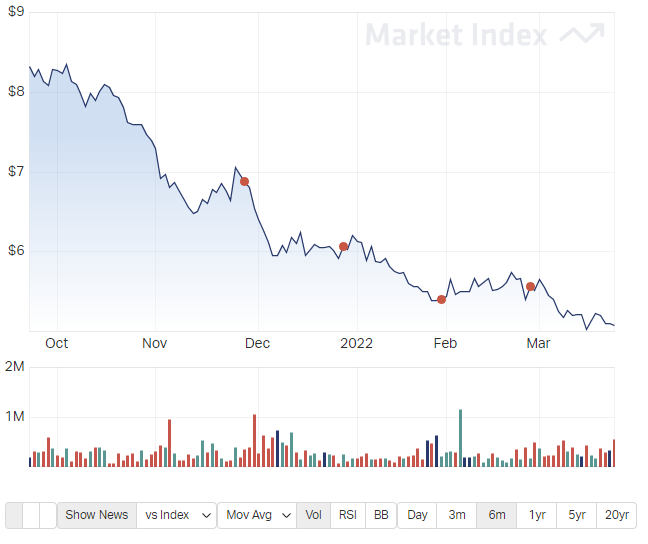 The Select Harvest share price has been losing ground over the last six months.

Two major brokers cover the company - Citi and UBS - and both have strong buy recommendations, with a consensus target price of $8.80, which represents 73.9% upside to the current price.

Based on Morningstar's fair value of $8.24, the stock looks undervalued.