After watching the share price fall away by around -21% since early June, due to inflationary pressures, downgrades to commodity forecasts and a downgrade by Goldman Sachs to Neutral, BHP (ASX: BHP) shareholders regained some lost ground this morning (up 2.41%) after the ‘big Australian’ announced a reasonably upbeat fourth quarter result.

This was flat on the prior corresponding period but in line with its guidance range of 249m tonnes to 259m tonnes.

Much of the strong finish to the year can be attributed to higher volumes at WA iron ore, reflecting record production from the Mining Area C hub and the continued ramp up of South Flank and improved supply chain performance.

BHP advised the market to expect the sale between 278m and 290m tonnes of iron ore this year. While at the midpoint, this matches the export volumes of the past three years, but is below consensus expectations of 292m tonnes.

Overall, BHP achieved the majority of its guidance, but nickel production of 76.8kt missed guidance due to an unplanned smelter outage.

In copper, Escondida in Chile had record material mined and near-record concentrator throughput, while Olympic Dam in South Australia performed strongly in the fourth quarter after planned smelter maintenance.

But after a challenging year hampered by covid and weather-related disruptions, production volumes within the company’s mainstay Australian iron ore and coking coal divisions are expected to be soft over the following 12 months.

Despite the strong operating result, BHP boss Mike Henry reminded investors that the outlook for the miner’s markets remained weak.

“Broader market volatility continues, and we expect the lag effect of inflationary pressures to continue through the 2023 financial year, along with labour market tightness and supply chain constraints,” he noted.

But on a slightly more positive note, over the year ahead, Henry expects China to contribute positively to growth as stimulus policies take effect.

However, continuing conflict in Ukraine, the unfolding energy crisis in Europe and policy tightening globally are expected to contribute to an overall slowing of global growth.

The company notes major progress in its plans to open a new potash business, completing the first shafts and the underground mine, and hopes to bring forward the opening date for its US$5.7bn Jansen mine in Canada to 2026. 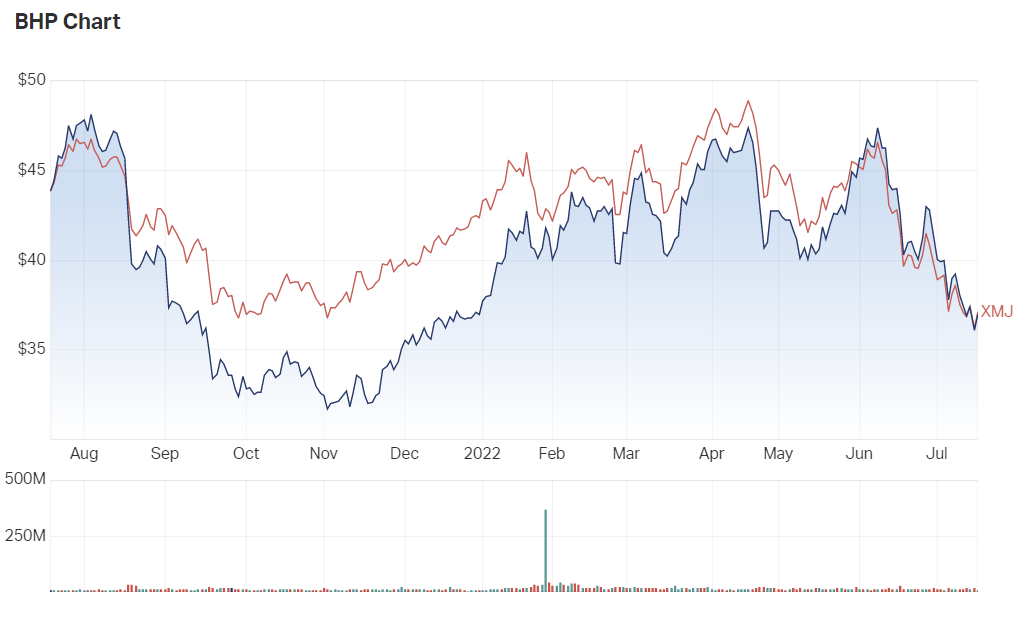 Consensus on BHP is Moderate Buy.

Based on Morningstar’s fair value of $39.07 the stock appears to be undervalued.

Based on the six brokers that cover BHP (as reported on by FN Arena) the stock is currently trading with 18.1% upside to the target price of $44.33.

The broker notes the company's FY23 production guidance remains in-line with its own projections, with copper the primary driver for volume growth next year.

RBC considered BHP's fourth quarter production report as weak, noting a strong performance in copper and thermal coal, with the remainder of the portfolio, including key revenue driver iron ore, coming in below expectations.

The bank’s analysts expects downward revisions to consensus heading into the FY22 results.